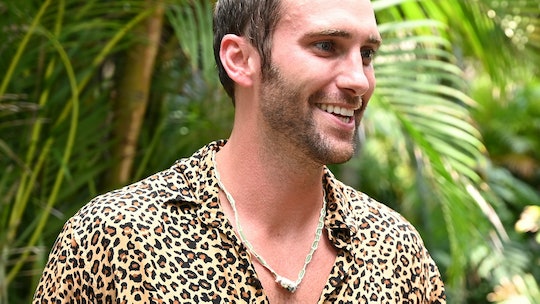 Let's face it — Cam Ayala wasn't brought to Bachelor in Paradise to be taken seriously. Although there is still time for his redemption arc, from his rap in the premiere to his uncomfortable interactions with the cast, it's pretty clear the reality star is the sixth season's comedic relief. In the Aug. 12 episode, viewers watched as Cam tried to woo Caelynn Miller-Keyes, but his pursuit was thwarted when Mike Johnson arrived in Mexico. Cam was left heartbroken by the ocean, and fans took it upon themselves to create Cam on the beach memes from Bachelor in Paradise. And per usual, they are nothing short of cringe-worthy.

Before you call me out on making light of this man's heartbreak, let's recap what happened in the episode. Cam and Caelynn spend some time together, and Cam reads her a letter he wrote the night before. The speech is filled with a bit of nonsense, and Cam comes on a little strong. During their talk, Caelynn definitely looks freaked out, but Cam is smitten. In a confessional, he admits he's already thinking about marriage, which seems too soon, considering they've known each other for a day. Luckily, Mike arrives in Paradise, and he asks Caelynn out on a date. Meanwhile, Cam is seen sulking by the beach and claims Mike is taking away his future wife. Derek Peth and Dylan Barbour see Cam and say what viewers are all thinking — Cam should probably talk to some of the other women rather than staring off into the abyss. And yet, here we are.

Many fans saw Cam's reaction as overly dramatic. And quite frankly, I think they're right. There are other women in Paradise, so why is he moping over one prospect that didn't seem too into him in the first place?

For those of you who don't remember Cam's time on Hannah Brown's season of The Bachelorette, Cam thought he was going home, so he wrote goodbye letters to everyone in the house. He gave up before Hannah said her final goodbyes, and it looks like history is repeating itself.

Nonetheless, the theatrical shot of Cam on the beach in Mexico was too good for Twitter to pass up. Some fans played up the dramatics and created memes that are far too relatable.

One fan paired photos of Cam with the caption, "Me when the I experience the slightest inconvenience."

The same fan noticed the typo in their original post and one-upped their own meme.

"Me when I see the typo," the Twitter user wrote alongside another melodramatic shot of Cam. Same.

Although many viewers are laughing at the memes from the episode, you could probably say the creations of Cam staring wistfully at the ocean are like works of art. Seriously, just look at this comparison.

But no matter how you look at it, this is one moment Bachelor Nation will never forget.

Regardless of how you feel about Cam, he did make his intentions clear from the start, which is not something you can say about everyone on Bachelor in Paradise this season. However, he's going to have to get it together if he wants to progress in the show. So fans will just have to wait and see what happens next. Who knows? There might even be more meme-able moments in the future.