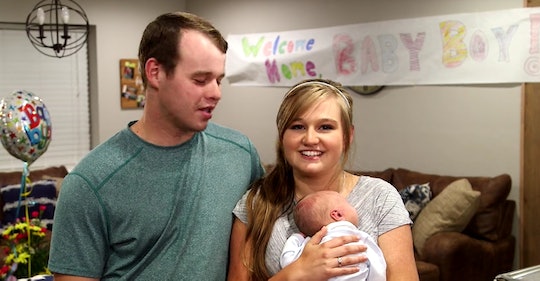 These Duggar Quotes About Pregnancy Prove It's Different For Every Woman

It's widely known that Michelle Duggar is no stranger to pregnancy. The mom of 19 kids, some of whom star on TLC's Counting On, has (obviously) had her fair share of pregnancies. But, her children are now the ones that are going though pregnancies themselves. In the past year, two Duggar daughters (and one daughter-in-law) have given birth to their own children These Duggar quotes about pregnancy show that the younger generation of Duggars are simply figuring out pregnancy on their own.

As previously stated, there have been a lot of Duggars who have given birth in the past year alone. Joy-Anna Duggar kicked things off when she gave welcomed her first child, a son named Gideon, with her husband, Austin Forsyth, this past February, according to Us Weekly. Then, Joseph Duggar and his wife, Kendra, welcomed a son named Garrett into the world in June, according to E! News. And finally, Jinger Duggar and her husband, Jeremy Vuolo welcomed their daughter, Felicity, into the world in July, according to Us Weekly.

This is on top of the already existing Duggar grandchildren — both Jill and Jessa Duggar have two sons, each, while their oldest brother, Josh, has five of his own, according to InTouch Weekly.

With that many pregnancies documented for TLC cameras, that must mean that the Duggar family members have a lot to say about pregnancy — and they do.

Jinger Duggar Was Real About Her Anxiety During Pregnancy

Leading up to the birth of her daughter, Jinger was pretty anxious about giving birth. She revealed to Us Weekly in March that she hadn't begun prepping for her daughter's arrival and was just trying to enjoy and embrace her pregnancy. Jinger said, according to Us Weekly:

I'm just trying to enjoy the pregnancy and I know that when the baby comes I'm going to be super excited to see it. It's just been so sweet with me and Jeremy. He just gets so excited when he thinks about us having a baby and last night he could feel the baby kicking for the first time and he was just thrilled.

In spite of everything she had learned about pregnancy through her older siblings, Jinger told Us Weekly in March that there were things that surprised her about her pregnancy. Jinger said, according to Us Weekly:

I do think what surprised me most is just being so tired all the time. I was never a napper, like, having to take a nap, and now it's like, "Ooh, I think I want to nap every day!"

And although Jinger had a lot of experience watching her mom go through her many pregnancies, she told Us Weekly in late July that she was still very nervous to give birth to her first child. Jinger told Us Weekly:

I had heard so much about what it would feel like, the kind of pain I would experience and how difficult it would be, and it made me nervous. But when the time came, I felt like God gave [me] the grace to cope.

Kendra Duggar Didn't Hold Back During Her Own Birth Special

Although Kendra was a little more private during her pregnancy (unlike other Duggar couples, her and Joseph do not have their own Instagram account), Kendra revealed quite a bit about her pregnancy during her birthing special, which aired on TLC's website weeks after she gave birth.

"I think this has definitely been really interesting because we've been able to share a lot of things that we didn't get to share before so I feel like we've become even more like friends," Kendra said.

But before she gave birth, in March, Kendra told Us Weekly that she had been relying on her mom and her sister-in-laws for advice during her pregnancy. Kendra said, according to Us Weekly:

It's been a really unique experience in that we're getting to share all of the different changes that our bodies are going through and can talk about them and encourage each other. It's definitely been nice.

Joy-Anna Duggar Was Open During Her Pregnancy

During my pregnancy I was always open to advice and ways I could prepare myself for the birth and just being a new mom. Some of the best advice I received is just to rest before the baby gets here, because once the baby is here, you're not going to get rest for a while until he's on schedule.

For the most part Joy-Anna's pregnancy seemed pretty easy. Joy-Anna said during her TLC birthing special, according to People:

I think going through this pregnancy for me has been good. I haven't really had morning sickness, not a lot of food aversions, so that's a blessing. But at the same time I think it has been somewhat challenging just because there are a lot of new emotions and hormones and things that I've never had before.

But, before she gave birth, Joy-Anna was also scared about what her life would be like once she finally did give birth. "Before Gideon was born, I didn't know how adjusting to motherhood would be like," Joy-Anna said, according to Us Weekly. "But now that he's here, I can't imagine life without him."

Jessa Duggar Has Never Been Shy About Her Pregnancies

Although Jessa Duggar is now the mom to two sons — 2-year-old Spurgeon and 17-month-old Henry, according to Us Weekly, her pregnancies are still fresh in fans minds. And throughout both of her pregnancies, she has never been afraid to hold back things from fans.

During her first pregnancy in 2015, Jessa confirmed to People that she had been strugging with morning sickness. "The morning sickness was different every day," Jessa said. "It's getting better but I'm still hanging on to the heartburn. And I don't have any super-serious food cravings."

But, her second pregnancy in 2017, was a lot different than her first. Jessa explained during an episode of Counting On, according to People:

This pregnancy has been different than my first pregnancy in many ways. I've had way more food aversions and certain things like coffee, chicken, popcorn, random other things — we couldn't even have them in the house. I didn't have that with Spurgeon.

Jill Duggar Has Been Super Confident During Her Pregnancies

Jill Duggar's road to parenthood with her two sons — 2-year-old Israel and 1-year-old Samuel with husband, Derick Dillard, according to InTouch Weekly — has been just as exciting as her sister's pregnancies.

In 2014, during her pregnancy with Israel, Jill was only eight weeks along with her son before she announced the big news. But she did this on purpose, according to Page Six — she was confident in God to announce the news early. "Understanding that the majority of miscarriages happen within the first trimester, and believing every life is precious no matter how young, we decided to share our joyful news as soon as we could," Jill told PageSix.

And in 2017, just before Samuel's birth, Jill was confident and relaxed when it came to talking about her pregnancy. Jill told People:

There's a level of ease that comes with your second pregnancy. Derick and I have been down this road together, so we're comfortable. I'm just going to see how this goes, try to be healthy, and prepare as much as I can. But this time I know labor can be unpredictable.

Although each girl has been pregnant, their thoughts on pregnancy reflect their own unique personalities and experiences. That's awesome.