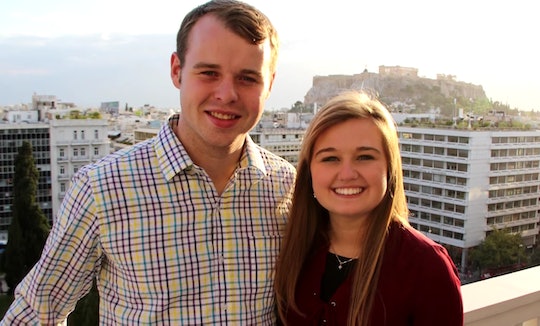 Most Married Duggars Are On Instagram, But Is Soon-To-Be Mom Kendra Duggar?

The Duggar family has a lot of dos and don'ts that they abide by daily due to their strong family values and faith. While most people can't live without their social media accounts, like Instagram, the Duggars aren't necessarily attached to the platform and some Duggar family members don't have even have an account. So if you're wondering if Kendra Duggar is on Instagram, try not to be upset by the answer because you won't be catching her in your feed anytime soon.

The majority of the Duggar siblings (there are 19 of them in case you weren't aware) simply can't have any access to social media until they're engaged, according to In Touch Weekly. But once they're married, things change and they have the option to document their lives for fans online and put themselves out there. This is why you won't find 27-year-old Jana Duggar on Instagram but while you will find her 19-year-old sister, Joy-Anna, on there, who recently got married to her husband, Austin Forsyth. But even marriage doesn't mean that some Duggars want to be on Instagram.

Joseph Duggar married his fiancé, Kendra Caldwell, on Sept. 8 last year, according to People, and yet they currently do not have an Instagram account, separately or together, which is really sad for Duggar fans who want to keep up with every Duggar when their TLC reality show, Counting On, isn't on air. Instead, the Duggar family's official Instagram account posts when they have any official announcements to be made.

Don't be fooled by fake accounts. There are many of the fake Instagram accounts imitating Kendra and Joseph circulating around, but you can tell that they're fake from the letters "RP" attached to it. While they might not have their own Instagram accounts at the moment, it is possible that they did have one at some point in time. When it came time to announcing the sex of their baby in February, according to People, Kendra did make the announcement on her Instagram account. In December, according to In Touch Weekly, Kendra also announced her pregnancy in an Instagram post. But since then that Instagram account has disappeared and Kendra and Joseph have not yet made any announcements or publicly said why they might have wanted to delete it.

There could be a reason why Kendra and Joseph might want to stay off of Instagram — because people are kind of ruthless on it. In December, Kendra was mom-shamed on her cousin's Instagram account during the early months of her pregnancy for snow tubing while she was pregnant, according to In Touch Weekly, and people weren't too nice about it. The best way to avoid the hate when you're a celebrity? Not give haters an outlet to voice their opinions or comments. People are quick to judge and nitpick everything, thus you can understand why some people would choose not to have an Instagram account.

But you could understand why fans would want Joseph and Kendra to be on Instagram. Without their presence on the app, fans haven't been able to keep up with the progress of Kendra's pregnancy and have no idea how far along she is or what her bump looks like. From the sounds of it, her pregnancy has been going great. In an interview with Us Weekly, Kendra said that Joseph has been incredibly attentive. Kendra said:

Joe has definitely been super attentive to my needs. He knows exactly when I'm not feeling well and will be right there like, "What can I get you?" or "What do you need?"

But fans don't get to see that because they can't see examples of that attentiveness on Instagram. Instead, fans have to simply watch episodes of Counting On to see glimpses of the couple and their every day life, instead.