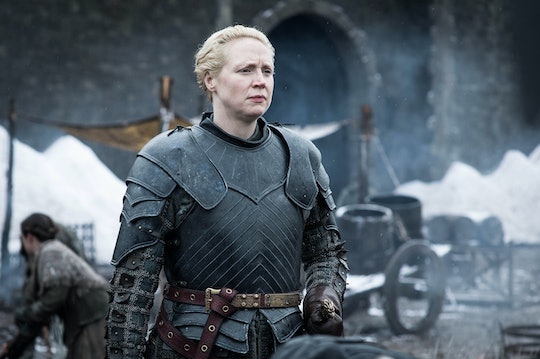 Last night's episode of Game of Thrones might as well have had a Tormund warning on it that everything out of his mouth would be comedic gold. Not unlike in his past scenes on the show, Tormund absolutely killed it, especially when he asked about Brienne, and fans are still obsessed with his unrequited love for her. So it's not all that surprising that the tweets about the big woman on Game of Thrones prove Tormund is a national treasure who should be protected at all costs.

His time on the episode started when he surprised Jon (and viewers) with a big hug and then asked him, "Is the big woman still here?" That wasn't his only scene-stealing line from the episode (giant's milk, anyone?), but it reminded fans that there is a woman he has been after since he first saw her last season.

Even if Brienne is still unsure about what to make of him, you have to hand it to Tormund for being relentless in his pursuit of her without being too pushy. In last night's episode, Jaime even seemed to quietly approve of Tormund and Brienne getting together and everyone knows if your best friend approves of your potential boyfriend, he's totally in. That being said, I'm not sure if Brienne is actually *there*, but Tormund's love for her is seriously adorable and fans are still shipping them anyway.

Some Game of Thrones fans would like to be Tormund's "big woman" themselves and can you really blame them? This is potentially the end of days and Tormund is telling Brienne to screw tradition and be a knight, offering her a warm bed if she wants it, and he seems like the best person to have as protection from the white walkers. I wouldn't say no to being Tormund's big woman either.

A lot of fans just love that Tormund loves Brienne and that she doesn't know what to with him half the time. So just in case anyone thought Tormund would cool on her just because there are more important things to worry about, like the dead marching on Winterfell, that is definitely not the case.

Tormund's interest was piqued the first time he saw Brienne after she asked Sansa to be her protector. He saw Brienne has his equal, a worthy fighter, and a woman who could potentially have a large family of warriors with him. It was… cute? Funny? The kind of comedic relief a show like this needs? It was probably all three, and fans continue to ship them even though now probably isn't the best time for new romances to pop up. Jon and Daenerys notwithstanding, of course.

Sometimes it's hard to tell if Brienne really is put off by the things Tormund says to her because as a fighter, she has never really been about romance. Or, she might just not know what to with Tormund's harmless advances and she may have some more than friendly feelings for Jaime. As with all things on Game of Thrones, it's a little complicated, but after the Battle of Winterfell, things might be uncomplicated when 25% of the main characters inevitably die.

Until Tormund and Brienne meet their own deaths, however, he seems to be intent on trying to be with her. You have to admire his persistence and fans are still hoping they will make it out if the show alive and, somehow, together. Tormund is kind of too adorable not to get his own happy ending.

Some might argue that this is no time for Tormund's light hearted personality and certainly no time for him to be pursuing Brienne. But I say if they both make it out of this battle unscathed, then Tormund and the big woman should have their fun if they both want to. If not, there are millions of Game of Thrones fans who would have Tormund for themselves.