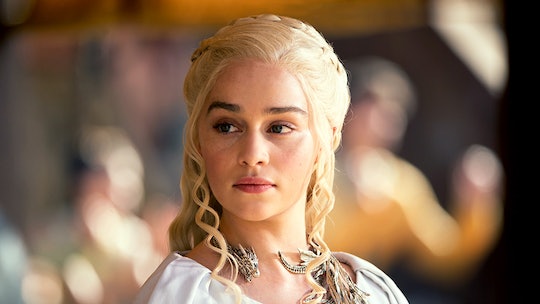 Some books and TV shows just suck you in, don't they? When writers can build up rich, detailed worlds that nevertheless bear important sociological and emotional similarities to our own, that's when you get stories for which fans go berserk. I'm talking Harry Potter, Lord of the Rings, Hunger Games and, of course, Game of Thrones. It's not just that we fans are simply ubernerds who spend way too much time contemplating which Great House you'd belong in, it's that we're contemplating the very nature of the human condition...and also we're ubernerds. But how can we help building connections with such compelling characters? Take, for instance, Daenerys Targaryen from Game of Thrones. She doesn't know it (probably because she's not real) but Dany and I are best friends.

More Like This
Here's Everything We Know About 'Black Panther: Wakanda Forever'
Josh Duggar's Family Has Spoken Out As He Faces Child Pornography Charges
Anna Konkle & Maya Erskine Are Both New Moms
Queen Elizabeth Has Given Her Royal Approval For A New Line Of Beer

Born at the height of Robert's Rebellion on Dragonstone, Daenerys was the last child and only daughter of Aerys II, aka, The Mad King. Once Jaime Lannister assassinated the king, allowing Robert Baratheon to lay claim to the Iron Throne, it looked like the Wee Baby Dany was not long for this world (or, erm, her world I suppose, since she's not actually real... allegedly). But a kind and loyal knight by the name of Willem Darry spirited the infant and her brother Viserys (who turned out to be just a bit of a psycho) across the sea to Braavos. A childhood spent in hiding and fear (of both political enemies and her own abusive sibling) leaves Daenerys a timid, meek wisp of a thing when we first meet her in book/season 1.

But before long, our girl channels her vast stores of inner strength and grit to rise and become the queen we know her all to be. The queen who must, must be in our core group of gal pals. Here's why we need her in our lives...