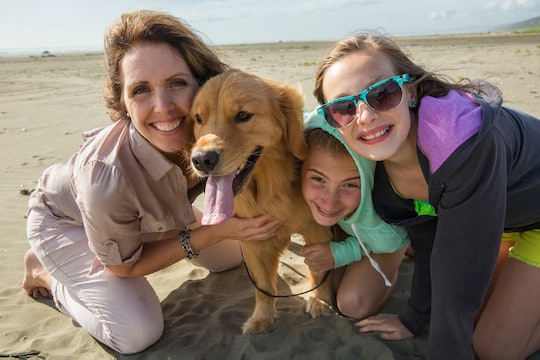 12 Signs You've Found Your Calling As A Bonafide Dog Mom

Women with pets are becoming more loud-and-proud about declaring themselves the "moms" of their dogs and cats. Whether or not they also have children of the human variety, pet owners refer to their beloved animals as their "fur babies," and they're just as devoted to their fuzzy offspring as a parent is to their fuzz-less child. To be a Dog Mom is to be a part of a growing and proud community.

Not everyone agrees with the comparison (because everything is a topic for disagreement and debate these days, naturally). For every dog owner who asserts that she's every bit as much a mother as one of the ultra-prolific Duggars, there's an online naysayer who takes issue with the term "dog mom."

One such article, on The Cut, argued that raising pets is different from raising children because pet owners aren't in it to help their offspring become independent and responsible members of society. A rebuttal, published on HelloGiggles, offered a thoughtful counterpoint. No, the writer acknowledged, caring for a pet isn't precisely the same as giving birth and bringing up a child to adulthood. Still, she argued,

But anyone who takes in a creature who then relies on them to keep them sheltered, fed, and loved is a parent. It doesn't matter if that creature is a child, a dog, a cat, or even a fish. It's an unpaid job that is based on loving selflessly and unconditionally, and anyone willing to do that job gets the title of "parent."

So how can you tell if you're a true dog mom? Here are some unmistakable signs.