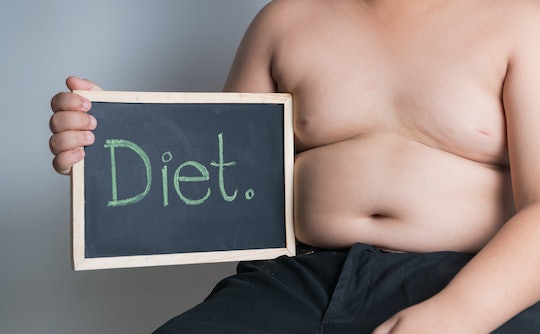 If, as Peggy O'Mara says, "the way we talk to our children becomes their inner voice," then fat kids are screwed. At the very least, fat kids are going to have to do a lot of arguing with their inner voice if they ever want to usurp it and find their own, kinder, more confident voice. Sadly, there are things people say to a fat kid that they would never say to a thin kid and, color me totally shocked, they all suck.

Our society is fatphobic, to say the least. From laughably unfunny comedians ranting against fat people to otherwise reasonable, cool humans misguidedly ranting against fat people, we are caught, it seems, in an echo-chamber constantly resonating with disdain for fatness. If you're a fat person caught in this hellscape, I wish you strength, resilience, and courage because there's no doubt you'll need all three in spades.

Being fat is not definitively indicative of anything other than the amount of adipose between one's muscle and skin. Yet our culture seems hell-bent on continuing to treat fatness as a moral failing and an impediment to true happiness. There is nothing worse than being fat, we think (society "we," not, like, "you and me," because f*ck that noise). This is a lesson we've been taught our whole lives, and, as we get older, a lesson many of us pass down to our children, repeating the damaging and moronic cycle for the next generation.

"I don't care what they look like," we say, "I just want them to be happy and healthy." And yet despite study after study showing that being overweight often has nothing to do with one's health, and that it's perfectly possible to be happy, healthy, and fat, we consistently urge fat children to "make healthy choices." Sure, we should be urging them to make healthy choices, just as much as we urge thin children to do the same. Otherwise you can't argue that it's their health you're concerned about: it's obviously their fat. So, having said all that while simultaneously attempting to feel uplifted about our society, there are a lot of things a fat child will hear growing up that their thin friends will not be subjected to. Including but not limited to...