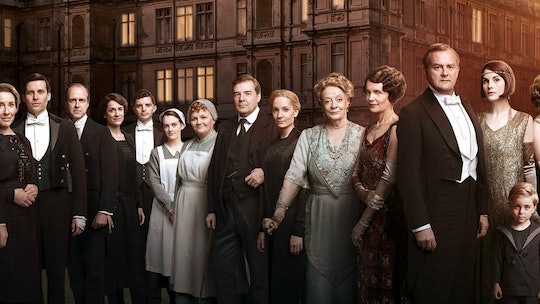 Downton Abbey fans are finally about to get what every fan base from a widely acclaimed TV show strives for — a movie years after the final episodes aired on TV. Even if a TV show ends on a high note with all of the storylines wrapped up with perfect little bows, you never say no to a big screen movie that brings your favorite characters to life again. And the Twitter reactions to the new Downton Abbey trailer show that the fans never went away. They might have been waiting in the shadows with bated breath for their promised film since the British period drama ended in 2015, but their tweets prove that the series' fan base is still alive and well.

The original series premiered on the British network ITV in 2010 and PBS soon followed in airing the historical drama to give the show a wider release and bring in more viewers. Downton Abbey went on to air for six seasons in total and although viewers mourned the loss of their favorite British drama that brought together fans from all over the world, the show was kept alive with the promise that a movie would come later on down the line. And instead of being a made-for-TV movie, which I’m sure fans would have been happy with, the Downton Abbey movie will hit theaters on September 13 in the UK and September 20 in the US.

Before that premiere date at the end of the summer, however, Downton Abbey fans are going to be geeking out over the latest trailer.

According to Entertainment Weekly, a large portion of the original series cast will return in the film, including Michelle Dockery, Hugh Bonneville, Maggie Smith, and Joanne Froggatt. The outlet reported that some new faces will also make an appearance in the film adaption, like Imelda Staunton from Harry Potter and Kate Phillips from The Crown and Peaky Blinders.

Sadly, one character who won't be in the movie is Cousin Rose. Last July, Lily James told People that it just didn't make sense for her character to pop back in for the movie, given the way her arc ended in the series. "My character, Rose, moved off to New York, so it would be far-fetched to bring her back," she told People. "I would have loved to have come back for a scene, but for a movie it can’t be like a Christmas special and it needs to be a focused story line. There was no space for Rose."

Even so, the new trailer for Downton Abbey makes it seem like the movie will pay homage to the characters in a way that fans will totally eat up. At this point, Downton Abbey fans would probably take anything to be given the movie already, but it looks like no details were spared in creating a movie adaptation to do the original series justice.

Judging by the trailer, they are going to have a lot of updates to fit in before the plot really thickens. It looks like Dame Maggie Smith is as fabulous and witty as ever and Lady Mary and Henry are still together and totally into each other. There’s also a quick shot of Thomas kissing a mystery man. The king and queen are likely going to take center stage in the movie, however, as the servants at the Downton house prepare for their arrival. The movie already sounds like everything fans had hoped for and more.

Some fans have already re-watched it enough times to memorize most of the scenes and one-liners and I honestly can't blame them. Until Downton Abbey premieres in September, this trailer is all fans have to go on to satisfy their thirst for the historical drama.

The movie definitely seems like it will do the original series justice and it gets bonus points for being a big budget big screen film. There’s no word on whether or not it will give way to sequels or if it will be a one-off service for fans, but Downton Abbey has definitely maintained its fan base over the past few years and fans will likely be clamoring to see it on opening night. The only question is whether to dress up like Queen Mary or Maggie Smith for the premiere.