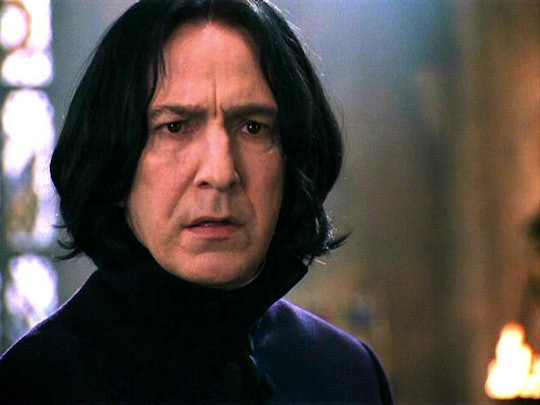 12 Ways Every Toddler Is Basically Exactly Like Professor Snape

Harry Potter fans don't need me to remind them that the original Half-Blood Prince is a complicated, multi-faceted character. Actually, parents of young children don't need me to tell them the same. At first glance, it may not seem like Severus Snape and little kids have a lot in common, but after extensive research, I've actually come to the very opposite conclusion: the two have way more similarities than meets the eye.

For the record, I consider Snape to be brave and badass, despite his questionable methods of displaying these traits. While plenty of his day-to-day behaviors actions are borderline deplorable, his major accomplishments (spoiler: protecting Harry, his loyalty to Dumbledore, his turn as a spy at GREAT PERSONAL RISK TO HIMSELF) are nothing short of heroic in my opinion, though I realize this is entirely debatable.

And yes, while I think my own son is the center of the universe (in a totally healthy, non-overbearing, well-adjusted mom kind of way) with unlimited potential, I fully recognize that it's a bit early to predict whether or not he will have a similar impact on society, by oh, say, falling in love with the mother of The Chosen One and becoming a major player in saving the wizarding world from a vicious Dark Lord, while maintaining a generally sour demeanor. Who knows.

While Potterhead parents have plenty of ways to enjoy our fandom while parenting, I can't help but have a little fun with this one, too. Because, frankly, there's no getting around the truth: Toddlers are basically Snape. Here's how: