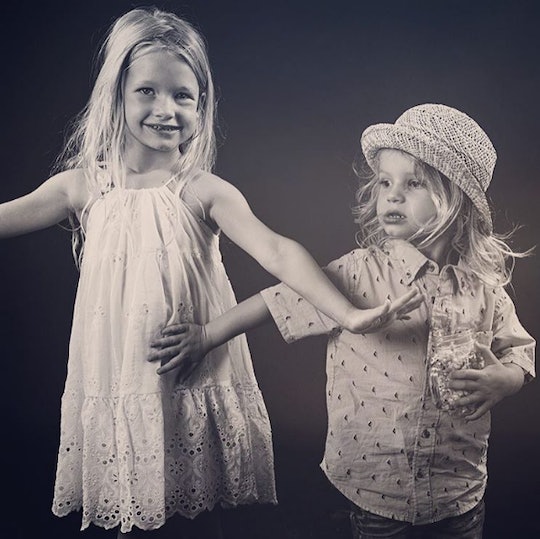 As much as I love my daughter, I can't wait to have another baby. Not only to give her a playmate, but because two babies dressed in adorable outfits is just too cute for words. Celebrities know what's up with families of children, especially the celebrity baby siblings who look exactly alike. I mean, any picture of Riley Curry is adorable, but pair her up with her little sister in a matching dress and you have the ultimate definition of adorable.

The world pretty much loves celebrity siblings, regardless of age. Hello, have you heard of the Kardashians and their empire? I don't know if it's because having two siblings be celebrities is such a shock (How is it that both Chris and Liam Hemsworth can exist in the world and be in movies? How?) or if it's just a fascination society has with families, especially celebrities, in general.

But even the most famous look-a-like celebrity siblings (I'm talking to you, Olsen twins) can't compete with these 13 celebrity baby siblings who look exactly alike. Just when you thought their celebrity parents' genetics had already created a perfect, beautiful baby, here came a sibling that looks exactly the same, potentially throwing the entire universe out of orbit.

Daughters of two-time NBA MVP Steph Curry and chef Ayesha Curry look fairly different when you see each of them alone, but together, Riley and Ryan Curry look exactly alike. Their coloring matched with their beautiful eyes makes them adorable enough, but when their parents dress them alike? Oh, I'm swooning.

The future King of England isn't the only one that likes to dress in blue and he's also not the only adorable tot running around Kensington Palace. Both Prince George and Princess Charlotte resemble their parents and with their matching cherub cheeks and sparkling eyes, they could pass for twins.

Kourtney Kardashian and Scott Disick's youngest children are basically carbon copies of each other. Just look at those sweet little profiles.

OK, so Gideon and Harper may be twins, but they also have different DNA which makes it even more fascinating that they look so much alike. Check out those button noses, all of that blonde hair, and the sweet spark they both seem to share. The Burtka-Harris twins are too cute to pass up when naming favorite celebrity babies.

Tamera Mowry is part of a dynamic look-alike duo, and but her own children also look a lot alike too. I can't get enough of those grins from both Ariah and Aden.

Are we sure Britney Spears' boys aren't twins? Because Sean Preston and Jayden James look so much alike, I'm almost certain the could prank their mother with a switch trick.

Reese Witherspoon's boys may have different dads, but they still resemble each other so much. Deacon and Tennessee both have the same chin (thanks to their mom) and eye shape, and it looks like they have both practiced the art of smiling with your eyes.

The youngest of Bruce Willis's children, Evelyn and Mabel have very different features, but put them next to each other and their electric smiles convince you they are twins with a big age gap. Brown eyes versus blue eyes are no match for those wide-open, fresh faces.

Will Smith and Jada Pinkett Smith have two of their own children, but Will's first child, Trey, looks so much like his half-sister Willow that it's uncanny. Both kids have different biological moms, but in these throwback pictures of the two Smith siblings, you can see so much of their father in both of them.

Alyson Hannigan and husband Alexis Denisof have two beautiful daughters, but I'm not sure how they can tell them apart unless they're looking at size. Because holy moly, Keeva and Satyana are serious look-alikes. With their mother's coloring, those sweet little freckles, and matching profiles, I don't know how the couple hasn't added ten more children to the family.

One of my favorite celebrity families is the Decker bunch, with singer Jessie James Decker and New York Jets wide receiver Eric Decker. Their two kiddos, Vivianne and Eric II may not look similar at first glance, but check out those big, bright eyes. Their sweet little faces have more similarities than not and both look absolutely scrumptious in every picture the proud parents post.

I don't know if my heart can take how cute Nick and Vanessa Lachey's children are. In these pictures, both Camden and little sister Brooklyn have a similar expression and the resemblance is uncanny. Those noses and eyes are just too much.

I'm sorry, forget all of the twins in the world, no pair of celebrity baby siblings looks more alike than Jessica Simpson and husband Eric Johnson's two children, Maxwell and Ace. Can you even tell the difference if you didn't know them? No, I think not.