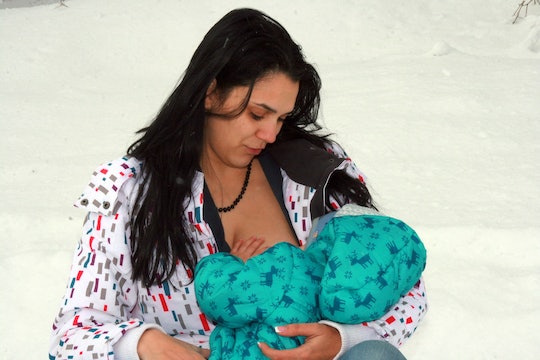 13 Moms Describe How They Explained Breastfeeding To Kids

Breastfeeding is a wonderful thing. It keeps babies fed and healthy and strong and builds a beautiful bond between parent and infant. Some mamas choose to breastfeed in public without batting an eye, while others are more conservative in their approach, opting to use covers or nursing rooms. Eventually, though, most breastfeeding moms will have to explain what it is they’re doing exactly to other young children; whether that’s their older kids, nieces and nephews, or even the baby they once fed and, perhaps, no longer recall the act. So how do you explain breastfeeding to kids?

Many moms take a pretty direct approach, explaining that it’s simply what mothers and babies do, while refusing to shy away from using anatomically correct words for specific parts of the body. Others might have a more difficult time, as many of us grew up in households where you just didn’t talk about certain body parts and, if you did, were shamed and criticized (which is why teaching your children the proper names for body parts is so important). Fortunately, it’s never too late to unlearn shame, and learning to openly discuss breastfeeding is a great stepping stone in the right direction.

I spoke with a few moms who told me exactly how they went about explaining breastfeeding to kids, which might help others to find the words they feel comfortable using, too. After all, we're all in this together, right? Might as well learn from one another.

“‘That's what breasts are for.’ Also, it wasn't really a conversation because both of (my kids) were breastfed into toddlerhood, and we always had friends with nursing babies. It was just normal to them. Still is. They once asked me what formula was, I explained it was an option for mothers who couldn't or didn't want to breastfeed.” - Ani Perreault

“With our 10 year old it was pretty easy as we have talked about what breasts and nipples are for. But having nursing seen in practice plus the challenges we had establishing latch has been a lot more first hand experience.” - Julia Hope

“[My daugther] was almost 3 when [my son] was born. ‘He's drinking milk. New babies only need milk and mommies can make it. You drank milk from me when you were little. You've seen your friends' moms feeding their babies too,’ was really all that was needed as an explanation.” - Katie Stitzer

“My sister just relayed a story recently to me about my niece that touches on this topic. [My niece] asked my sister who saw a breastfeeding parent at a park near their house if what the mama was doing was like what the mama tiger at Aunt J's work does when she has to feed the cubs. My sister pretty much told her that that was exactly what she was doing, and was able to explain that all baby mammals need milk to survive and that lots of baby humans get their milk from their mothers, too. [My niece] was happy with that explanation and now knows exactly what breastfeeding is.” - Jenna Stitzer

“I made no big deal of it. I just say, 'look how cute! The baby is eating,' if we see someone breastfeeding; and to us it's just one way babies eat. [My son] saw plenty of that with [my daughter] since she breast fed for 2 years. To him it's just normal.” - Jenny Ibasan

“Right now it's all my son knows. He's almost 3. If he sees another child nursing he sometimes asks if they're getting Bah (our word for it), and I will say yes. Then he may ask if they're hungry or if that's their mama, but the conversation doesn't go beyond that, because it's a normal thing in his life. We've already been trying to teach him that his soon-to-be baby sister will need Bah. He's fine with her eating, he just isn't ready to share the source.” - Kristen Brown

“My kids just saw it all the time, because we're inveterate hippies and so are our friends. My son shared milk with his godbrother and best friend - both from me and from my best friend. So they think milk is communal.” - Elizabeth Broadbent

“I was pretty straightforward about it. When my daughter was born I (breast)fed her and as my son saw it happening the first time, I just explained, 'This is how little babies eat: there's milk in my breasts and she drinks it. I used to feed you this way, too, but now you're big and you like eating apples and carrots and pizza.’ Considering I nursed every 2 hours for a while (and for 21 months), he got used to it pretty quickly. I have a great video of him ‘using’ my breast pump and excitedly declaring ‘Milk is coming out of my breast!’” - Jamie Kenney

“My 3 1/2 year old nursed until he was 2 1/2 (self-weaned when I was pregnant) so he remembered nursing when I started feeding his baby brother 5 months later. He even tried again to nurse but couldn't latch. He knows boobs have milk, so there's never been anything to explain to him!” - Shannon Shelton Miller

“I've told my kids throughout their lives that my body made milk for them to drink, and that they drank that milk, but that not all babies drink breast milk, some drink milk from a bottle, and that they both had Mommy milk and bottle milk and both are fine. Now that they're older, it's the same conversation with larger words and descriptions of things like mammary ducts and nipples and teaching babies to latch, etc. They are boys, but they like the science of it all. - Joanna Schroeder

“I extended breastfed all four kids (most to age 2, one to age 3), and since they were so close together, some of them remembered breastfeeding themselves. I co-breastfed a couple of them. The toddler got a talk about needing to share their milkies with the new baby and it helped them bond. For the older ones who no longer remembered nursing, I just said this is how babies eat, just like mama animals feed their babies." - Sarah Broussard Weaver

“With my two year old, we just explained the baby needed milk from mommy's boob. At that age, that was explanation enough. Now, when I ask why the baby is crying, she says, ‘I think he needs boob.’ Early on, she was very curious about breastfeeding and wanted to nurse, but couldn't remember how to latch. It was a really sad moment for both of us." - Shana Westlake

“Going through this now... My first son is 2 1/2 and my second is almost 7 weeks. I simply told him that when mommies have babies, their bodies make milk to feed the babies that comes out of their breasts. Sometimes Baby W gets mommy milk by nursing and sometimes mommy pumps milk and he drinks it from a bottle. He hasn’t been remotely fazed by me nursing but he thinks pumping is a little strange...which of course it is.” - Katie Van Horn Davis