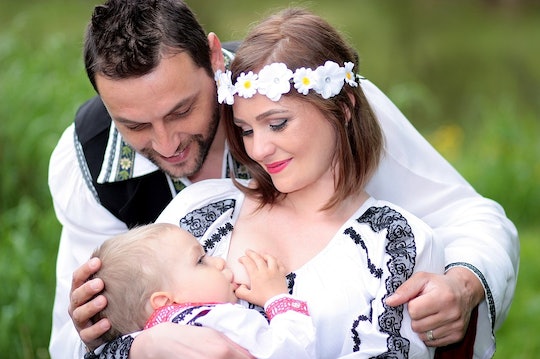 13 Moms On The Worst Thing They Heard While Extended Breastfeeding

While most new moms in the United States will give breastfeeding a whirl, most won't engage in what is considered to be "extended breastfeeding." As such, most moms, fortunately, will not have to deal with the special brand of crap that moms who choose to nurse past one year get to hear regularly. I talked to some moms about the worst thing they heard while extended breastfeeding and, well, oh my.

An estimated 81 percent of new mothers will choose (and be able to) breastfeed. That number drops precipitously (to about 44 percent) at three months old and then steadily thereafter. Approximately 1/3 of babies are still breastfed at 12 months of age. In other words, moms who decide to try their hand at "extended breastfeeding," aren't considered the "norm," and open themselves up to some pretty ridiculous judgement and scrutiny. While the CDC recommends that mothers nurse their children exclusively for six months and continue to nurse until twelve months, most American moms do not reach that mark. For many, it is simply an issue of choice, and that's just fine. For many others, however, uncooperative employers, limited access to lactation consultants, and, of course, spectacularly terrible family leave policies impede their desire to breastfeed as long as they'd like. (I would be shocked to learn of that the fact that most women stop breastfeeding within three months, which is also when most women return to the work force, is a coincidence.)

Lack of exposure to nursing a child past infancy has served, in many instances, to make the practice taboo, even though the CDC (citing the American Academy of Pediatrics) says "at least 12 months" and the World Health Organization recommends "two years of age or beyond." Many of the women I talked to wished to be quoted only under a pseudonym, in many instances because these rude comments often came from people they know well, love, and/or (have to) continue to see. Coworkers seem to be the main culprits so, food for thought: don't be an asshat to your nursing coworkers. Still, coworker or not, everyone can learn a thing or two from women who know exactly what people should not say from their own experience.