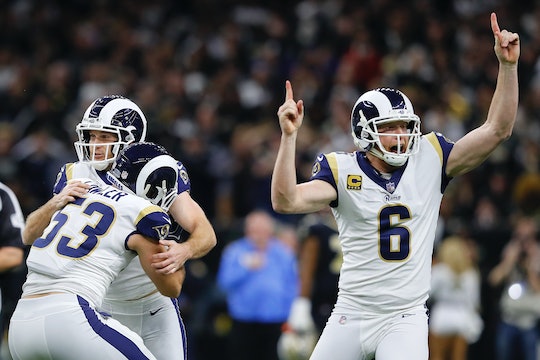 They finally did it. Almost 20 years since the last Ram's Super Bowl win, the Los Angeles based team is back and ready to face the New England Patriots in the ultimate football showdown of 2019. The sports world's excitement is tangible, and it seems like everyone who isn't an actual Patriot's fan is rooting for your guys. All that's left is for the Rams to play their hearts out while you cheer them on from the couch — oh, and for you to prove your love for them with one of these 13 Instagram captions for Rams fans.

Don't get me wrong, the most important part of the Super Bowl is obviously the game, but it's important for you to show your support for your favorite team. Patriots fans are notoriously enthusiastic (or obnoxious, depending on how you want to look at it) — Thrillist literally ranked them as the worst fans in the NFL, so you'll want to return the gesture and show as much hype for the Los Angeles Rams with all you've got.

Posting a pro-Rams Instagram isn't the only way to show your love; you can go all out and roll out an impressive Los Angeles-inspired menu at your Super Bowl party, deck your house in blue and gold decorations, and outfit the whole family in matching jerseys. But if you're looking for something that requires minimal effort, an Insta caption is the way to go.