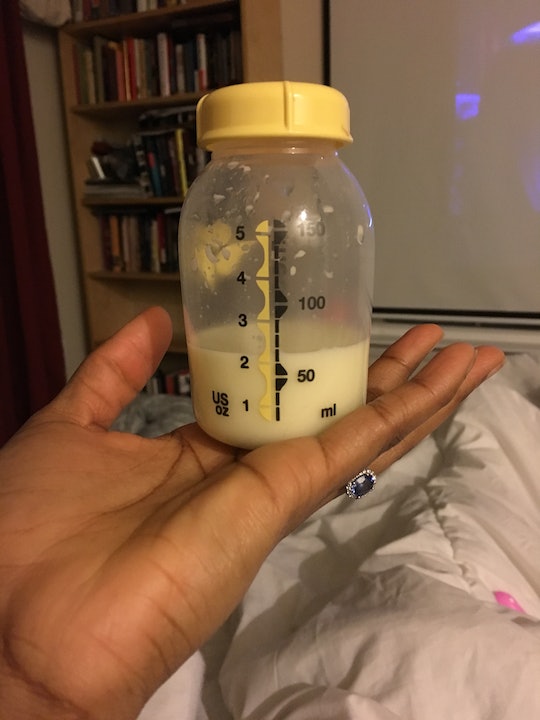 The day after I gave birth, my midwife came over to check on me and my son. Like every first-time nursing mom ever, one of the first things out of my mouth was, "We're kinda starting to figure out how to latch, but I can't tell if there's anything in there." She asked if she could show me how to hand express breast milk, I said "Of course!" and we did. At that point, I was still making tiny drops of colostrum — "The perfect amount for his tiny little tummy, don't worry!" — which didn't flow all that quickly, but it reassured me that my boobs were working as expected.

"Just watch," she continued. "In a few days, as your mature milk comes in, you'll be spraying streams everywhere." I laughed, partially because "spraying streams" sounded hilarious to me, and partially because anyone else but her talking about my boobs spraying anything would be really weird. You can get pretty close with someone when she helps you give birth, though.

My midwife was totally right, of course. A few days of nursing every other hour later, my breasts were the biggest they'd ever been (I about fainted later that week when I went to my local breastfeeding center for a nursing bra fitting, and heard what size she recommended), and uncomfortably full. My sleep-deprived mama brain didn't quite remember the graceful little motion my midwife had done, so I found a YouTube tutorial of another mom of a new baby (who looked way more put together than I did at that point) and started engaging in a little trial-and-error. The first time you hand express milk is strange, interesting, a little exciting, and mostly really funny, because it's pretty much inevitable that the following will happen:

More Like This
41 Strong & Sweet Baby Boy Names That Start With “K”
Baby Growth Spurts: When They Happen & What To Expect
25 Winter Solstice Baby Names For Your Magical Little One
The Best Black Friday 2022 Deals For Moms