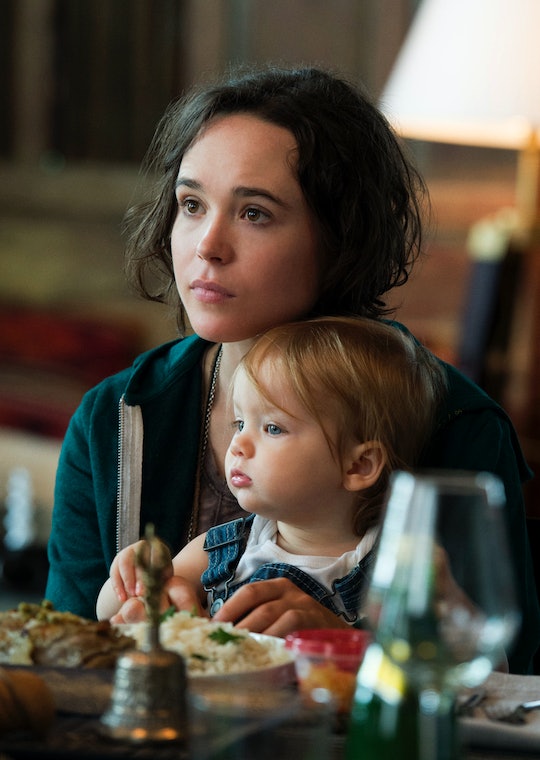 13 Ways 'Tallulah' Gets Motherhood Right, Because We're All In This Together

Sundance favorite, and soon-to-be Netflix release, Tallulah begins streaming on July 29, highlighting the talent that the film is made up of, and creating a canvas that allows careers to replenish. Namely Ellen Page's adult career, as she comes out in a role that is like the next chapter of the Juno star's past. With that said, Tallulah gets motherhood right in everything way. From the judgmental social worker and mother of three, to the negligent mom who is still figuring out how to take care of another human being, to the titular character, Tallulah (Page), who becomes a would-be surrogate mother and takes on motherhood exactly like any other clueless millennial mom.

If you've ever held a mirror under your toddler's nose while they were sleeping to make sure they were still alive, then you have every reason to attach yourself to this movie. We all know the fears and realities of being a first time mom, and many of us have dealt with delving into motherhood before our our 20s are even over. Sometimes we become the negligent moms, who wait just a little longer than we should to change that first diaper of the day, or we become the scared sh-tless moms, who have a special baby-proofed cabinet stocked full of the most holistic cold and flu remedies for toddlers.

Basically, Tallulah gets motherhood right on all fronts, and not just because our darling Ellen Page is running the show, along with Allison Janney and Uzo Aduba. It is a beginner's guide to first-time motherhood that will make you nod your head in agreement one scene and sob uncontrollably the next. Tallulah says everything you're thinking about motherhood, through the words and actions of the different kinds of mothers the movie explores. And there are several different kinds.

Every new mom feels this sense of hopelessness at some point. Even the most super of moms, who like to do it all with a smile on their face, knowing the reality of feeling hopeless at some point. It could be when potty training woes make it seem like you'll be changing the poopy diapers of a five-year-old someday, or when it's just one of those bad motherhood days where nothing goes right. Like, at all. But as awful as the feeling is when it comes, it's normal.

2. Shaming From Other Moms

When the social worker (Uzo Aduba) calls Carolyn (Tammy Blanchard) a "shitty mom" in Tallulah, your first instinct is to be like, "Ugh, finally", but it's a way more important scene than having the stressed out, clueless alcoholic mom of the movie told off. It's about one mother shaming another for her shortcomings and, despite what we all collectively go through, judging her for being what she sees as a bad mom, which we know is not a productive experience for anyone.

3. Fearing The Worst For Your Kid

Like I said before, say that you're never checked on your kid's breathing in the middle of the night or been so concerned that they were in such a deep sleep that you wanted to wake them up to make sure they were OK, and you're a damn liar. But worrying about your kid, even through irrational fears, is a huge part of motherhood that we all endure. It's the price we pay of giving ourselves over to these tiny humans who warrant our love just by sticking their fingers in their noses.

4. Getting That "Mommy" Feeling Later Than Others

In another important scene, this time between Carolyn and Margo (Allison Janney), Carolyn reveals that she waited a long time to feel that connection to motherhood that so many other moms claim to feel early on, even before they give birth. And the truth is that a lot of moms end up getting that "mommy" feeling later than the moment they conceive, because it's something you can't force and just sort of wakes up inside of you. It's the same thing as wanting to have a kid in the first place, for some. The desire suddenly pops up one day and it just feels right.

5. Never Getting That "Mommy" Feeling

Carolyn goes on to say that despite waiting for that feeling to come, it never did come for her. In the end of Tallulah, we do see it sort of click for her, but a lot of moms tend to think that just because they don't feel this instant connection to their child that they're bad moms. But we're all different. There's a reason why helicopter parenting works for some, while free range parenting is the way to go for others, and why some parents don't adhere to anything at all. We're all different as people, so of course we're all different as mothers, too.

6. Losing A Sense Of Yourself

The first thing you notice about Carolyn in the movie, other than those Spanx she's wearing like a dress, is the fact that she's obviously so regretful of what she says she's had to give up in order to have a child. Namely her body, but also a certain amount of freedom. When you have a baby for the first time, some of that is painfully true. It takes a little while to start feeling like yourself again.

7. Figuring Out What's Supposed To Be Normal

As a new mom, you tend to cling to Google and the wise results of mommy boards that always give you conflicting answers but that you take and run with anyway. You want to do what's normal as a mom and you want to raise your child the right way. Watching Tallulah figure out which diapers to use and seeing her get instructions on how to feed is what we've all experienced as moms. Trying to figure out what's "right" in terms of raising your kid is something that never really goes away.

The social worker judged Carolyn, but Carolyn judged her right back, scorning her for being "one of those moms" when she asked that Carolyn not smoke in front of her and her very pregnant belly. And the young mom in the baby store likely judged Tallulah, as she struggled to find diapers, while Margo judged Tallulah as an inept mother for living out of a van. Then, Tallulah judged her as a mother, since Nico had run away from home. We can all be as guilty of shortcomings as moms, but still find ways to judge others. It's not a good look on any of us, mind you, but it's a part of motherhood that comes to us all pretty quickly. Call it a new personality trait, or call it a defense mechanism — either way, it's not cool and we all know it.

9. Always Being Lost About Something

With motherhood, it always tends to feel like once you get the hang of one thing and latch onto it, suddenly there is something else entirely to get used to or learn as a parent and once again, you're lost. Margo is a good grandmother, as we see her with Madison, so we have to assume she was good to Nico before her marriage seemed to crumble, which pushed Nico away. And having to juggle two important things, like your marriage and parenthood, can make anyone feel lost without a paddle.

10. The Overwhelming Feeling Of Being Alone In It All

Carolyn makes it clear that she has both a husband and a nanny to help her in taking care of Madison, and that this is the first time she'd even been alone with her, taking care of her by herself, but that feeling of not knowing what to do with yourself when you're doing it all alone is legit. Even if you have a partner to help you take care of your kid, motherhood can mean parenting on your own sometimes or feeling like you're doing something wrong no matter what you do right.

Tallulah asked Margo for help, but mostly because she needed help for herself before she even took Madison from the hotel. Still, she came to rely on Margo and before that, Carolyn was quick to ask Tallulah for help herself. But doing that as a parent is not an easy thing to do. You don't want to feel like a failure or less than what you should be as a mother, so you hold off on asking for help until you're almost to a breaking point. By the time Tallulah stumbles upon the hotel room, Carolyn is drunk, getting ready to go out to meet a man, and only then does she ask for help.

12. Worrying About Your Kid's Future When They're Still In Diapers

Tallulah's worries over Madison dying someday because everyone dies was funny for sure, but as a mom, I have had those exact same weird thoughts about my own kid. It's what you do, though, and it's another one of those costs for loving this awesome little extension of yourself. Before they can even walk, you're worrying about their future and what awful things they might have to endure. It's also probably one of the most un-fun things about being a parent.

13. The Wonder Of It All, Even After The Baby Stage Is Over

When Tallulah and Margo are watching Madison sleep, marveling at her tiny hands and feet and all around cuteness, it's something any mother can relate to. The whole watching your kid sleep thing is real, and not just something two perfect doting parents do at the end of the night on TV shows or in movies. You stare at this kid you helped create or are raising and legitimately can't believe how much they've grown and will continue to grow.

What Tallulah gets right about motherhood is everything good and everything stressful about it, but that's kind of the territory of being a mom, whether by choice or by surprise. And the different sorts of moms peppered in throughout the movie show you that each feeling or worry are normal, if sometimes almost neurotic. Tallulah will be available for streaming on Netflix Friday, July 29.