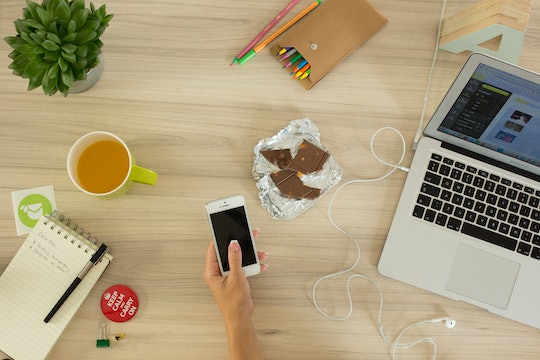 13 Women Share The App They Got Obsessed With While Pumping

I did not have a smart phone before I started breastfeeding. But after about two months of just. sitting. there. for untold hours unable to watch TV (it distracted my son), unable to hold a book to read (I'm absurdly uncoordinated), and running out of podcasts (there's only so many episodes of Savage Lovecast), I broke down, and it was like Dorothy opening her farmhouse door to Oz and seeing a world in technicolor. When maternity leave ended, my smartphone became even more crucial due to my demanding pumping schedule. The app I became obsessed with while pumping? The (then) newly launched WNYC app.

For those of you not in the know (or the New York-Metro area), WNYC New York City's NPR affiliate, and it's fabulous. I don't have their tote bag (because I don't always get to the phone during their pledge drives, but I'm hoping touting the virtues of their app will put me in their good graces anyway), but if I did I would carry it everywhere. So their app, chock-full-o-podcasts, articles, blogs, and all the stuff I never got to listen to because I didn't drive anymore, which is where I used to fit in about 90 percent of my WNYC/NPR time, made the dismal hellscape that was pumping (well, for me anyway) not just bearable but enjoyable.

I talked to other women about the app that got them through those dark and necessary pumping days, and here's what they had to say.