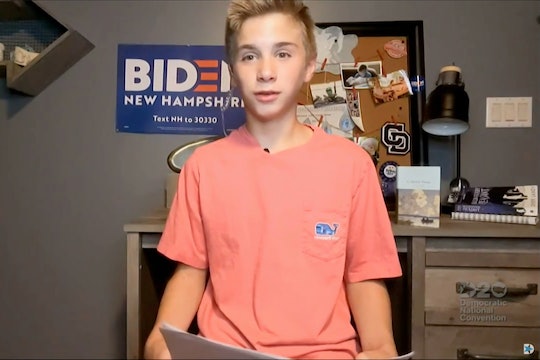 There have been many memorable moments at the 2020 Democratic National Convention, but perhaps none more moving than the story of Brayden Harrington, the 13-year-old boy who bonded with presidential nominee Joe Biden over his stutter.

On the final night of the DNC, Brayden delivered a speech from his home about the first time he met Biden. Back in February, Biden was speaking at a political campaign event in New Hampshire when he met the 13-year-old boy on the rope line. After speaking briefly, Brayden explained on Thursday night that Biden invited him backstage so the two could chat. That was when Biden told Brayden, who struggles with the speech disorder, he himself has long struggled with the same thing.

"He told me that we were members of the same club: We stutter," Brayden said on Thursday. "It was really amazing to hear that someone like me became vice president."

Brayden went on to explain that the Democratic presidential nominee showed him his own speech where he "marks his addresses to make them easier to say out loud." "So I did the same thing today," the teen added.

Their conversation stayed with Brayden, who spoke in front of a Biden campaign poster for his DNC speech. "I'm just a regular kid, and in a short amount of time Joe Biden made me more confident about something that's bothered me my whole life," he said.

Stuttering, or childhood onset fluency disorder, affects around 3 million Americans, according to the National Institute on Deafness and Other Communication Disorders (NIDCD). While stuttering tends to affect younger children between the ages of 2 and 6 years old, around 5 to 10% of people will continue to struggle with it throughout their lives. The NIDCD notes that the cause of stuttering is not precisely known and there is no exact cure, which means many people like Biden and Brayden come up with coping mechanisms as they did with their speech writing.

And as with everything, support is important, which is why Biden taking time out of his schedule to bond with a young boy over a shared communication disorder made such an impact. "Joe Biden cared. Imagine what he could do for all of us," Brayden said in his speech. "Kids like me are counting on you to elect someone we can all look up to. Someone who cares. Someone who will make our country and the world feel better."

Brayden has also managed to inspire others as his speech quickly went viral. Many people took to social media to commend him on his courage, like one man who said he also had a stutter as a kid. "As a kid, I was a stutterer and I am dyslexic," he wrote on Twitter. "And, Brayden Harrington is my hero. I would have never had the courage to stand up the way he did tonight. Thank you for your bravery."