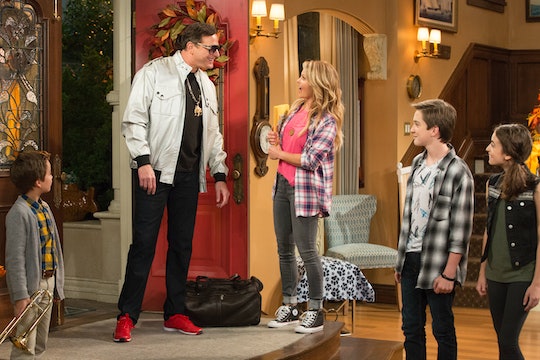 Fuller House returned to Netflix for a second season on Friday, Dec. 9 and it definitely packed all the self-referential jokes we came to love from Season 1. Part of the fun of any reboot is catching all the easter eggs that throwback to a show or movie's original iteration. Fuller House did a stellar job of squeezing in not only those golden catchphrases, but also flashbacks, and other jokes poked at themselves. These Fuller House meta jokes from Season 2 prove the team behind the show has been in on the whole joke since the beginning.

Of course, there are also just great throwbacks to the original in general, like Max naming his chickens Danny, Jesse, Joey, and Becky. Stephanie's band Girltalk also got back together very briefly to perform their one hit, Ace of Base's "The Sign," complete with Marla Sokoloff, who reprised her role as former bad girl, Gia. (She even reprised her original storyline of peer pressuring Stephanie into smoking cigarettes when she tried to get Stephanie hooked on vaping. "All the soccer moms are doing it!") Between the guest appearances by other '90s sit-com stars and the amazing source material of Full House itself, Fuller House really nailed its meta jokes this season. Here are some of the best ones.