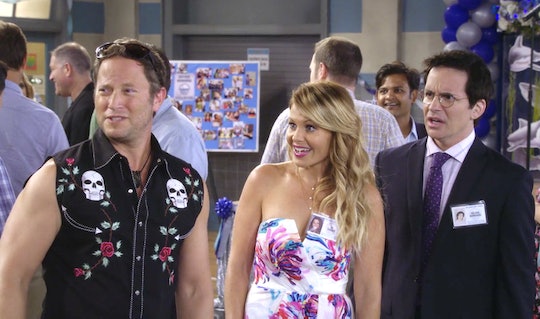 (Warning: This post contains spoilers from Episode 11 Of Fuller House.) If you thought Fuller House was already chock-full of members from the original cast, then nothing probably prepared you for the awesomeness that awaited you during D.J. and Kimmy's high school reunion. Nelson, Viper, and Duane returned on Fuller House Season 2 and they were honestly the best cameos fans could've hoped for. Granted, the actor playing Nelson was different from the original portrayer (Jason Marsden was replaced by Hal Sparks due to a scheduling conflict), but the show made sure to make a joke at that discrepancy by having D.J. remark to him "You look almost the same." (I see what you did there, writers.) However, the roles of Viper and Duane were played by the same actors that were seen in Full House. And man was it good to have them back.

As for what these guys have been up to after all this time, nothing seems to have changed for Nelson and Viper. Nelson is still as uppity and successful as ever. In fact, he couldn't stop bragging to D.J. about how accomplished he is. (Did you know that he has a private jet?) And as for Viper, it seems as though he never was able to get over the eldest Tanner sibling since he only came to the reunion (even though he didn't go to their high school) in order to win her back. Naturally, the two guys proceeded to fight over D.J. like, proving that nothing's really changed. Duane (aka Kimmy's ex flame), on the other hand, is a different story.

As you can see in this picture, Duane now has a shaved head and is rocking some facial hair. But there was more than just his physical appearance that was different. You guys, Duane nows speaks in full-on sentences! (I know, I can't believe it either.) It turns out that Duane went to Harvard and became a motivational speaker. In fact, he decided to use his iconic catchphrase "Whatever" and turn it into a worldview. Kimmy's husband got stung by a bunch of bees? Whatever! Her entire graduating class is making fun of her? Whatever! And thanks to his heart-to-heart with Kimmy, this philosophy ended up really turning her of embarrassment around.

Suffice to say, it was so great to see these character again, even if it was only for one episode. So if Fuller House does end up getting renewed for a third season, I wouldn't mind seeing these guys pop up again. Just saying!