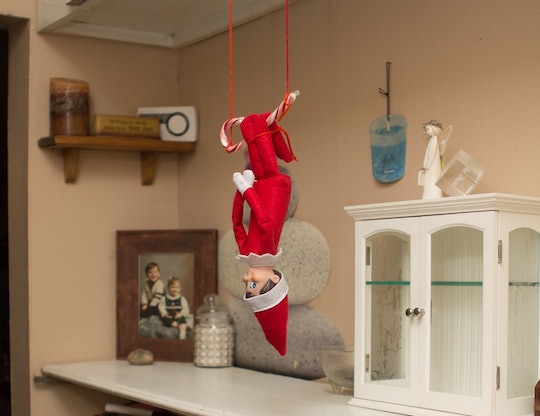 The holidays are fast approaching, and that means many things, the worst of all being: You need to come up with a zillion new ways to pose that dang Elf on the Shelf. As though the holidays weren't hectic enough for parents of young children, the race to move the elf each and every night will soon be on. If you're feeling burned out before the season even begins, then these hilarious memes for moms who hate elf on the shelf are for you. Hey, it's OK to have a laugh at the expense of the scout elf every now and then to preserve your own sanity.

How big is the elf phenomenon, anyway? Since 2005, over 11 million Elf on the Shelf books and dolls have been sold, according to the company website Creatively Classic Activities and Books. Elf-sized clothing, accessories, and even pets are now available as well. Plenty of families have adopted a scout elf to record the childrens' behavior and report back to Santa.

However, other parents experience what can only be described as Elf on the Shelf fatigue. For these parents, setting a scene with a doll every night during the holiday season is about the last thing they want to do. Sure, it's fun to bring joy to a child, and get caught up in the world of pretend, but essentially staging a tiny diorama every night — when all you want to do is chill for a minute — can feel like a drag. Thankfully, these memes and funny pictures prove that plenty of other adults are kind of over the whole elf thing, too.

More Like This
20 Ways To End Your Elf On The Shelf For Good
Experts Don’t Want You To Leave Your Fake Tree Plugged In
If Your Kids Love Their Elf, You Don't *Have* To Put Him Away On Christmas
31 NSFW Elf On The Shelf Ideas For Adults

This article was originally published on November 8, 2017