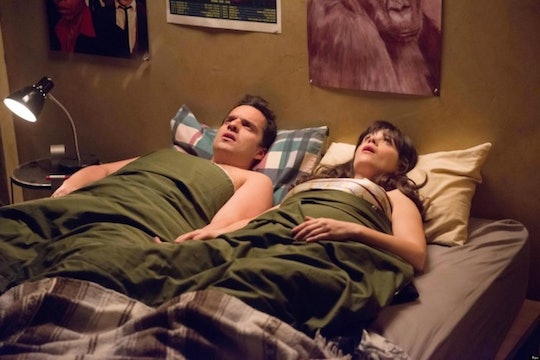 I know that people love to go on about how much you need to keep some things a mystery in a relationship, and how, at a certain point, the romance kind of fizzles into a steady, crackling fire, as opposed to the roaring blaze it was in the beginning. But the truth is, it is totally up to each couple when and if that happens. The gross things you do with your partner can either make you wonder and worry about how you got to this point of letting go of pretty much all of your boundaries, or make you feel like you are seriously involved with your best friend (which is pretty freaking awesome).

If you're part of a couple who has seen some ish and gone through a lot to get to where you are today, in a happy and normal relationship, then you can appreciate the need to just totally be yourself around that person. And if you're with someone who has pretty much grown up with you, how could you not be comfortable farting in front of them and spitting up lougies that sit in your mouth the entire car ride because if you open to window to spit it out, it'll surely fly right back at you?

Although (almost especially) if you have a kid with your partner, there is very little chance that you have hidden any of the gross things you do in front of them. There is something about seeing a baby crowning, or helping you shave your bushy bikini line while nine months pregnant that just says "eff it" to any of the so-called "mystery" that you're supposed to be holding onto.

But trust and believe that you are not alone in the gross things you do with your partner and in front of them. I, for one, don't know how my husband can still be attracted to me with all of the farting that goes on in this house. And, I guess, to make you feel even better (because I am totally about to put myself on crazy blast here), I can safely say that anything gross that you've done in front of your partner pales in comparison to some of the fearless, disgusting things I've done in front of mine.

Like this one time when we both had to, well, empty our bowels of some crazy spicy Mexican food and he had to yell, "Shotgun! Bathroom!" and make the dash before I could even make it to the hallway. So by the time I made it to our only bathroom myself, the toilet was occupied and I was...crowning. So, I did the only thing I could think of and grabbed a few plastic store bags, turned on the sink to drown out any noise, stepped into the bathtub, closed the shower curtain, and did what I had to do. And all the whole, my husband was cracking the eff up from his place on the proper toilet.

But let me tell you that despite that moment, when our status as a gross and in love couple was pretty solidified, I had felt such insane relief. And afterward, we both laughed it off (probably him more than me; I'll never fully recover).

But we have a kid together now, so somehow he still finds some attraction to me despite the memory of the grossest thing I've ever done in front of him. Ours, it turns out, is not the only relationship where upsettingly icky things have gone down. I spoke with 14 women who have apparently reached beyond the mysterious level of their relationships and who were quick to share their own way-too-true stories about the grossest thing they have ever done in front of their own partners. (I mean, maybe these are not pooping in a shower level, but pretty far from tame.)

More Like This
What Is Emotional Cheating? Experts Explain
Why Is My Vagina Itchy? Experts Explain
Here's Why Your Vagina Burns After Sex
75 Would You Rather Questions For Couples, Ranging From Sweet To Sexy
What Parents Are Talking About — Delivered Straight To Your Inbox