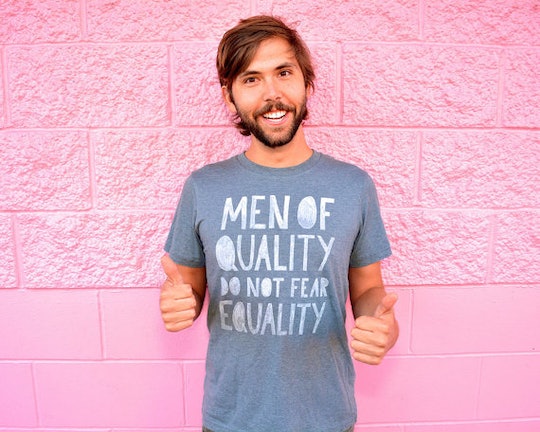 Father's Day is nearly here, and while another tie might be the safe choice for your dad, you could also go out on a limb and get him something that really expresses his personality and beliefs. And if you're one of the lucky women in this world who grew up with a feminist father, then you'll want to get him then Father's Day gifts for feminist dads are just for you.

Feminist dads are the best kind of dads, because they never limit their children's spectrum of possibility. They encourage both their sons and daughters to chase after the things they want. They never tell their sons that they can't dress up as princesses, nor do they tell their daughters they can't try out for the football team. They're not afraid of standing up for gender equality, and they're certainly not afraid to declare themselves a feminist for the rest of the world to see. I have to admit, while searching for feminist gifts for Father's Day, I began to come up short. And that's when I realized I was doing it all wrong. Aren't feminist gifts by their very nature considered gifts of gender equality? That's what I love about feminism. It's still teaching me things every day. Without further ado, here are a few sparkling gems from the world of feminist gifts to give your dad for Father's Day.