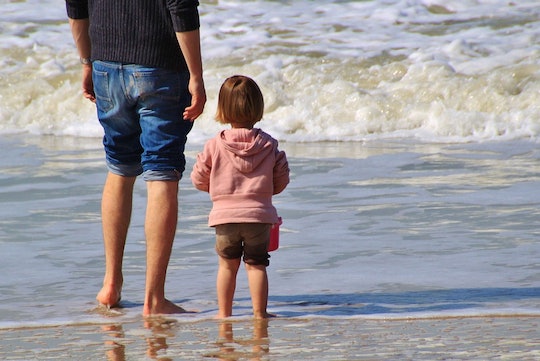 12 Things Feminist Dads Refuse To Say To Their Daughters

My husband and I are not the sort of people who like to wait to be surprised. So 11 weeks into my second pregnancy, I had a CVS performed and when the results came in my midwife called to let me know we would be having a healthy baby girl. But that's when it started: the sweeping generalizations about my daughter's future life based on nothing other than her vulva. People expected prickly feminist me to take umbrage. But my husband surprised a whole lot of people as they learned there are some things feminist dads never say to their daughters.

As I moved on in my pregnancy, I was delighted that my dude was helping me set the tone for the way I wanted my daughter to be treated once she made her grand entrance. In short, we wanted our daughter to pretty much be treated identically to how we wanted her older brother to be treated. He corrected people if they joked with him about keeping boys away. He assured them that the little lady would be encouraged to share his love of video games and sci-fi. He would thank people for their gifts of pink onesies with "Daddy's Little Princess" scrawled across the front and later turn to me and say "Did this come with a gift receipt? I feel like this is sort of creepy. You know how I feel about the whole princess thing."

While I personally don't have an issue with princesses or being called a princess, my husband did make a valid point: from a very early age, people can say truly creepy things to and about little girls, and it can be difficult to fight these expectations and stereotypes on your daughter's behalf all on your own. It's infinitely easier when both you and your partner are feminists, and when you have a feminist dad who refuses to say these 12 things to his daughter, you remember that you're not playing the parenting game alone.