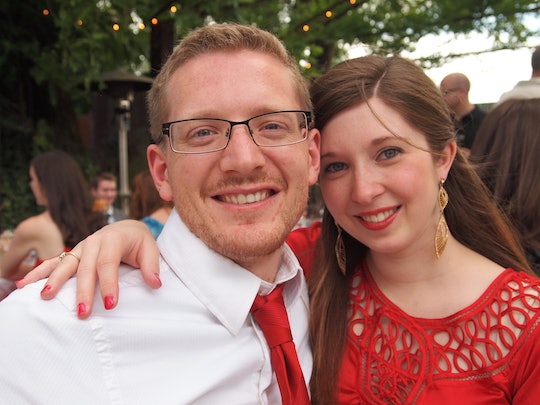 Why My Partner & I Are Proud Feminists

I wasn’t a feminist when my husband and I met. Or at least I didn’t think I was, because I was 16 and severely misguided about the actual definition of feminism. I thought because I liked wearing dresses and baking pies and wanted to someday have a traditional family that I was anti-feminist (Zooey Deschanel, where were you during my teenage years?). My future husband-to-be probably wouldn’t have called himself a feminist either. He was too busy thinking about whatever it is teenage boys think about to be concerned with the intricacies of gender inequality. At some point along the line, however, we both grew up. I found, quite early on in my adult life, that I was indeed a feminist.

My misconceptions were rooted in this idea that feminism was reserved for extremists. When I was growing up, the term feminism equated, in my mind, to hating men and hating any hint of traditional gender norms. It was all bra-burning and misconstrued anger and pushing women into high-powered careers whether they wanted that life or not. I didn’t understand that feminism supported my lifestyle, that I could live out the 1950s housewife dream and still call myself a feminist if that was my prerogative.

I love my life, and I am happy with the choice I've made to stay home with my children while they are young. It leaves me feeling fulfilled at the end of the day. But you need not go too far out on a limb to say maybe not every woman dreams of staying home with babies. Maybe some women don't even dream of babies at all (gasp!). And that's fine. I want every man and woman to live a life that leaves them feeling fulfilled at the end of the day, no matter what choices that does or does not include. And as a parent, I certainly want to strive for that sort of freedom for my children.

Luckily my husband agrees and understands what feminism is and what it is not.

It's not about hating men. It's not about putting the wants or needs of women above men. It's about leveling the playing field, because the human experience does not fit the cookie-cutter mold our society once dictated it would. As individuals, women and men deserve the chance to live out our unique dreams.

My husband and I both proudly claim the word feminist, for ourselves and for our children’s sake. We want them to grow up in a world where they are treated equally and fairly. We want them to explore all their passions without fear that they aren’t fitting into some outdated gender norms. We want them to know that they can set their sights on any career and we'll help them succeed as best we can. If my daughter wants to be an engineer, she damn well can. If she wants to stay at home and raise kids, she can do that as well. If one son wants to be a fireman and the other wants to be a dancer, they will have equal shares of our love and respect.

More Like This
How To Approach The Topic Of Emotional Labor With Your Partner
How To Ask Your Partner For Support When You Need It
This Is What Happens To Your Vagina When You Stop Having Sex
How Do I Rediscover My Sexuality When I’m Completely Touched Out?