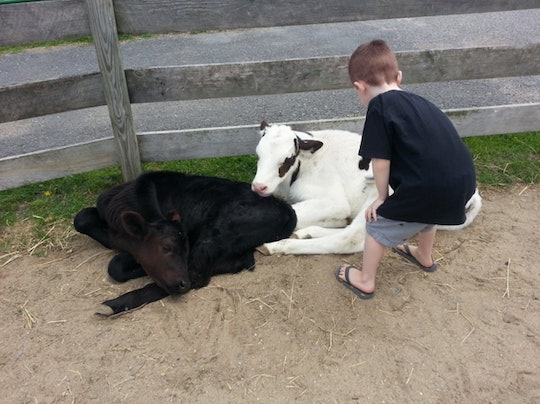 Mothers of girls, I do not envy you. Your daughters have a tough road ahead of them, and I know it’s an uphill battle molding strong women in today’s society. Your job is to raise the next generation of feminists, the ones who may one day see true equality. And I’m doing my best, as the mother of a boy, to help them get there, because I'm raising a feminist son.

We can teach every girl from birth that they can do anything, but what happens when they go out into the world and every single boy they encounter tells them, “No, you can’t”? How long until they internalize it? Raising feminist boys is just as important as raising feminist girls, because girls can’t rise up if the boys are up at the top, waiting to stomp them back down.

When my son was born, I thought I had parenting down. He was a Hello Kitty fan and he’d often witnessed me operating a power drill. This was easy, right? That is, until the day at Toys "R" Us when he referred to a pink doctor’s costume as a “nurse’s” costume. I couldn’t figure out where he’d gotten that idea that pink was a female color, or that women could only be nurses, and not doctors. He was only 3 years old; he spent 24 hours a day with me, and his only other influence, pretty much, was Nick Jr. But that’s when I knew I had to step up my game.

I started being more proactive in my approach. When he tags along with me to the polling station, I teach him about how it wasn’t too long ago that women didn’t have the right to vote; when we watch a movie where the hero “gets the girl” in the end, we discuss how it’s offensive to view a human being as a prize to be won (looking at you, every fairy tale movie ever).

I encourage him to value women for more than their looks. You’ll never hear me referring to one of his school friends as “pretty". I point out female role models, both real and fictional, whenever possible (I can’t wait until he’s old enough to watch Agent Carter!). I make sure he knows that the only things in this world that are “for boys” and “for girls” are public restrooms (and when the time comes, we'll talk about sex and gender and what those words can mean to a person). We both like Star Wars and nail polish, because Star Wars and nail polish are awesome.

I make corrections when needed, and explain things in simple, child-friendly ways. Recently, my son was telling me about a character in one of his video games. He described her as a girl. “A girl, or a woman?” I prompted him. “A woman,” he said. “You should never call an adult woman a ‘girl,’” I explained to him. “How do you think your father would like it if someone called him a boy?” He shrugged. “Well, there’s nothing wrong with being a boy. You’re a boy. But he’s not; he’s a man, right?” Another shrug. “Think about it this way: Do you like babies?” I know that he loves them, and he confirmed. “Now, what if someone called you a baby? How would that make you feel?” “Not good,” he tells me. “Exactly. Because you’re not. Babies are great! You used to be one! But you’re not anymore. You’re a big kid, and calling you a baby is mean.” He may not know the word “infantilizing,” but now he understands the concept.

The fact is, even if every girl born from today going forward is raised as a feminist, that’s still only half of the population, and if men aren’t standing with us as allies, it’s still a hopeless fight. And changing the worldview of a grown man, who has been actively benefiting from the patriarchy his whole life is challenging, to say the least. Sure, it’s possible to teach an old dog new tricks, but a better tack may be to teach boys from the start that they need to reject notions that, while they may initially seem to benefit them, are actually keeping them down as well.

There was no talk about the lack of Black Widow merchandise until Mark Ruffalo tweeted Marvel about it. Nobody believed the dozens of women who said they were raped by Bill Cosby until Hannibal Buress backed them up. And your new feminist hero, Matt McGorry, is just killing it on social media as he explores his new feminist identity and encourages his followers to join him. They’re making a difference, because as (famous) men, they already have the most important thing we women are fighting for: a voice.

But this is about more than just asking men to help women in their fight for equality. Feminism benefits men directly, as well. As Emma Watson explained in a speech outlining her UN HeForShe campaign,

Gender equality is your issue too. Because to date, I’ve seen my father’s role as a parent being valued less by society despite my needing his presence as a child as much as my mother’s. I’ve seen young men suffering from mental illness unable to ask for help for fear it would make them look less ‘macho’ — in fact in the UK suicide is the biggest killer of men between 20-49; eclipsing road accidents, cancer and coronary heart disease. I’ve seen men made fragile and insecure by a distorted sense of what constitutes male success. Men don’t have the benefits of equality either.

Today’s society teaches boys that men must be tall and muscular. They must be tough, competitive, and athletic. Men are not permitted to cry or display any emotion (unless their team wins the Super Bowl). Men may sire children, but may not care for them directly, because they are hopeless caregivers. They are also unable to cook for themselves, clean their own homes effectively, or shop for anything other than a car. Now you tell me, is that beneficial to our sons?

I know that in a few years, it’s going to get harder. Giving your son a sex talk is more than dad handing him a condom and warning him, “Don’t get her pregnant!” Mothers and fathers alike will need to teach boys about things like enthusiastic consent, why sexting is a bad idea (and possibly a prosecutable crime, if you’re a minor), and, because this world is garbage, he’ll apparently need to be taught that not only should you not rape, it’s also wrong to record your buddy raping someone and share it on Vine or Snapchat, or whatever the kids are into these days.

It’s a hard road ahead for moms of boys, too. But I can see the difference I’m making. Last month, my son (now 6) came home from school one day and told me that one of the boys in his class had been concocting a plan at recess to “defeat the girls’ team.” I asked him what he did. He told me that he confronted the boy, told him that was “not cool,” and then encouraged a handful of boys to join him in defecting to the girls’ team.