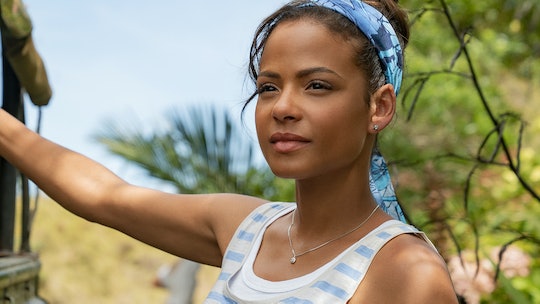 "I have no idea what you're talking about, but it all sounds amazing" is a phrase I felt when watching Netflix's original romantic comedy, Falling Inn Love. The words were spoken by the film's lead, Gabriela Diaz (Christina Milian), a San Francisco exec who traveled to a small town in New Zealand's countryside after entering a sketchy "Win an Inn" contest. Throughout her journey, Gabriela is captivated by Jake Taylor (Adam Demos), the steamy Kiwi contractor and firefighter. However, the real charm lies with Falling Inn Love's use of New Zealand slang words, as they helped audiences emerge themselves into the movie's setting — whether they're actually used by New Zealanders in everyday conversation or not.

In all honesty, as an American viewer, I had to turn on the subtitles when watching the film. I also skipped back a few times and jotted down phrases I didn't quite understand to Google later. But ultimately, the flood of New Zealand slang in Falling Inn Love just made me feel like Milian's character — a complete fish out of water. So maybe this is what the movie was going for.

Recently, Milian opened up about coping with the New Zealand accent and lingo, and her reaction pretty much sums it up. "I guess you have to live in it to understand what they’re talking about," Milian told Entertainment Weekly. "But there was definitely a few things like, ‘You wanna go take a squizz?’ And I’m like, ‘What the heck is a squizz? Oh, take a look at something, that’s what it is.’ But there’s a lot of slang words that are completely unheard of that sound like a wholly made-up word."