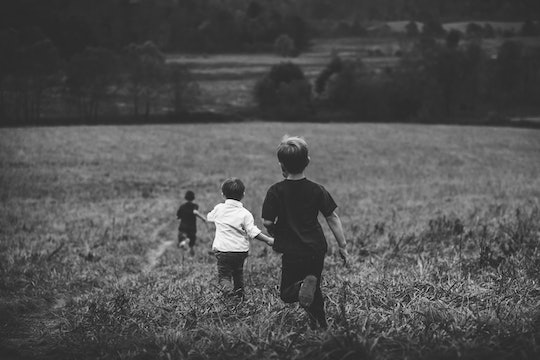 About a year after we began dating, my husband and I planned out our life together. Normally, two 21-year-olds who have been dating for a year, long distance, talking about the future is destined to stay well within the realm of fantasy. But through some adorable twists of fate, my dude and I wound up not only staying together, but seeing each of the plans we'd made come to fruition (sometimes by accident). When it came to deciding how many kids to have, the magic number was three: We both declared our intention to have three children spaced 18 to 36 months apart and that was that for about a decade.

Child number one came along and all was going according to plan. While we weren't aching for another newborn right away, we already talked about "the next baby," knowing that's still what we wanted. I got pregnant again days after our son's second birthday, and that's when things started deviating from our time-honored plan. Because almost as soon as I got pregnant I knew, in every atom of my being, that this was my last baby.

There were non-mystical factors at play: finances (#always), the practical experience of knowing how much one child takes out of you, and the fact that my husband and I were both cystic fibrosis carriers, which meant that our children had a 1:4 chance of being born with the chronic, often fatal illness. But even outside of all those factors, I was struck by the overwhelming certainty I felt in my decision.

In talking with other parents about when they were done having children, I was surprised that many felt the same degree of certainty I did about the completion of my family. Whether they were "one and done" or "two and through" or "three and... no more babies for me" or "four and...uh...shutting the door" or "five and... OK, no, I'm barely alive," the point is, everyone seemed to have an "a-ha" moment.

So how did they know their families were complete? Let's take a look.

More Like This
Quinta Brunson Credits Her Parents For Her Confidence, Now & As A Kid
My Parents Never Taught Me To Cook So I'd Always Need Them
Here's How The Cast Of 'Wednesday' On Netflix Compares To The '90s Movies
The Food Our Parents Fed Us