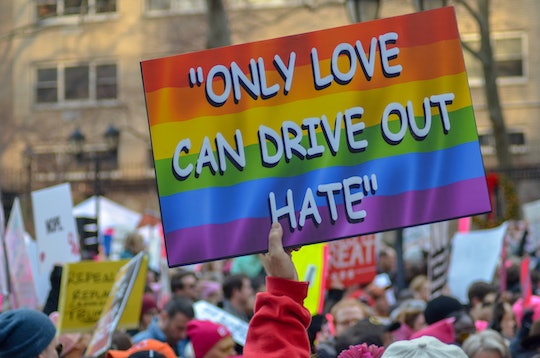 Inspire Your Followers With These 15 Women's March Instagram Captions

Will you be attending the Women's March this year? It's coming up soon, with marches scheduled for January 18 in Washington, D.C. and cities around the globe. If you plan to document the experience online, check out these inspiring Women's March captions to use on Instagram. The social media platform is an awesome way to share about the march and stay up to date on the latest news surrounding the worldwide event, as well as documenting your part in it all.

Now in its 3rd year, the Women's March first began as a protest to the inauguration of President Donald Trump, due to his offensive behavior and divisive statements over the years towards and about women. It was the largest single-day protest in United States History, according to The Washington Post, with over 3 million people attending. The Women's March believes that "Women's Rights are Human Rights and Human Rights are Women's Rights", and with current events as they are, gathering together in unity seems more important than ever. Everyone is invited to participate and support a message of equal rights for all. To find out the location and timing details of your city's March, head to the official Women's March website. Get those signs and Instagram captions ready!