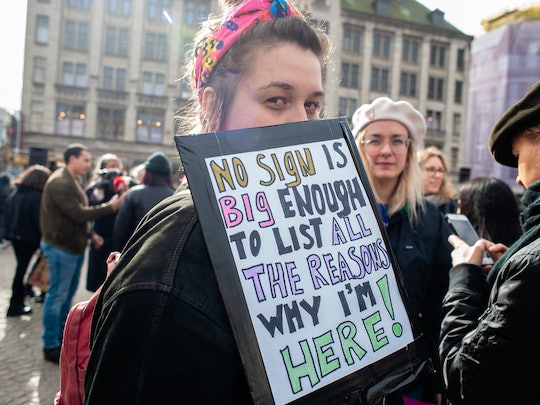 When Is The Women's March In 2020? Mark Your Calendar

Hooray, it's 2020! The patriarchy has at last been dismantled, and women are finally seen as fully equal human beings, with total control over their own bodies and futures! Jk! Things are still a total mess. And it is time, once again, to take to the streets and make our (shrill... always so shrill!) voices heard. So, when is the Women's March in 2020?

This year's march is set to take place on January 18. As always, the main event will be held in Washington DC, with busloads of people once again trekking across the country to pour into the nation's capitol. And of course, for anyone unable to make it to DC, sister marches will take place in cities large and small, around the world. A global human rights movement, the women's march will happen everywhere from Tunisia to Indonesia to Australia. (To find a march near you, the site offers a handy search tool.)

This will be year four for what is now an annual call to protest. And for some, the thought of yet another march might make them feel a little... tired. The idea that women once again have to stomp through the cold to remind people that we are also human beings — well, yeah, that can feel a smidge disheartening. But hey, if you need something to light a little fire under your feet, a quick scan of some of the headlines on reproductive rights ought to do it. Things like: "To Get an Abortion, Teens in 26 States Must Ask Parent or a Judge" or "The Trump Administration Goes After Birth Control." Or how about: "These 6 States Have Only One Abortion Clinic Left"? For many women, those stories are more than enough to make them want to dust off their pussy hats and scrawl some fresh rage onto the nearest scrap of poster board or pizza box.

And of course, the Presidential election looms large this year, which has led many of the marches to gear their efforts toward voter registration. As reported by the Daily News Journal, Tennessee will be moving their march from Nashville to Murfreesboro to help register voters in more rural communities.

Of course, it's no secret that the women's march can feel divisive for some women. As reported by the New York Times, even the organizers themselves have struggled with how to navigate and manage such a massive, massive movement of people. But regardless of where one might stand on specific political issues or candidates, the stated mission of the march is likely one every sentient being can rally behind. As per the march's main site: "Women’s March is committed to dismantling systems of oppression through nonviolent resistance and building inclusive structures guided by self-determination, dignity and respect."

The notion of every person deserving respect has been the motor powering countless movements and marches throughout history. That the march falls every year on Martin Luther King weekend is yet another reminder of our nation's legacy of powerful, peaceful protest, and the importance of rising up — again and again — to be counted.

More Like This
How Much Hair Loss Is Normal? 9 Signs You’re Losing Too Much Hair
How To Tell If Someone Is Lying To You: 34 Signs To Watch For
These Oktoberfest Instagram Captions Will Get Likes & Prosts
39 Halloween Trivia Questions & Answers