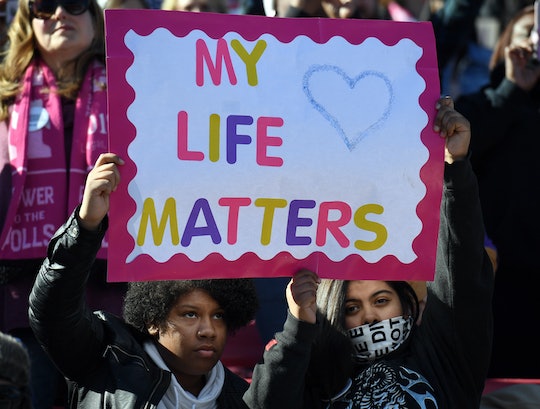 Already this is an interesting year for the Women's March. First of all, it marks the third year in a row when women and the men who support them rally together to march for women's rights. This year feels different. President Trump has now been in office for two years which once seemed a laughable impossibility but is now a sobering reality. There has been controversy surrounding the march, not to mention a quiet seed of doubt planted about whether rallying for women's rights remain necessary. Well let me tell you, judging from these Women's March signs the resistance is alive and well and as clever as ever.

On Saturday women in Washington, D.C., New York, and all over the world commemorated the first Women's March (initially inspired by President Trump's inauguration) by marching again. Banding together and rallying to call for change in gender equality, LGBTQ rights, racial issues, health care, and policy change. The numbers did not quite meet those of the first year, more than 3.3 million, but thousands of women still turned up in a show of solidarity and strength. Perhaps most notable in New York City where representative Alexandria Ocasio-Cortez spoke to a crowd of marchers as well as marching herself.

There were celebrity sightings as well, of course. In Los Angeles actresses Laura Dern, Connie Britton, and Rosie Perez were just some of the stars on hand to show their support.

Some signs were funny, because let's face it just because we're trying to topple the patriarchy doesn't mean we can't use a little wit every now and again.

It's also important to remember that not all men are part of the patriarchy... take this guy for instance.

Or this proud feminist dad.

There was one man in particular who was mentioned on the regular at the Women's March; President Trump. Like this woman who mocked him for once referring to several places as "sh**hole countries." As she noted, perhaps the fact that his own country has a yearly protest rally informally in his honor isn't such a great sign.

She said it more succinctly.

There were other countries around the world who took part in the Women's March on Saturday including Canada, where someone shared my favorite sign so far, "Toxic masculinity does not spark joy." Amen, my friend.

Here's a sign from a proud mom who raised a great daughter.

Now let's take a moment to realize that Princess Leia from Star Wars is obviously the feminist icon we never knew we needed to rally behind?

Although I would happy rally behind these women any day of the week.

At the end of the day these signs matter. I know there are plenty of people who would like to dismiss these posters as nonsense, but visuals matter. Words matter. Funny, fierce, powerful, sobering. All of it, and all of us, matter.