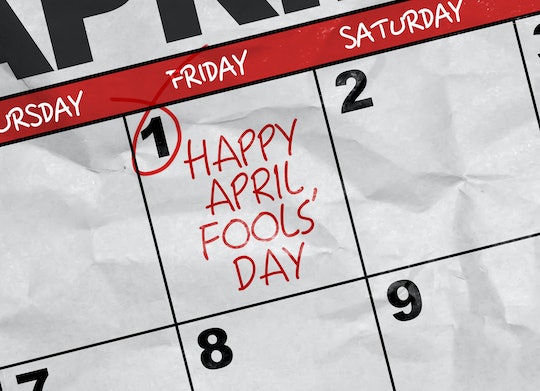 17 April Fools' Day Memes That Are Better Than Pranks

I'm not much of an April Fools' Day prankster these days and usually only celebrate with some April Fools' Day memes, but as a kid, I tried hard to win at this holiday. I distinctly remember playing my first April Fool's Day joke when I was around seven years old. My mom and I were just getting ready to leave our house when I thought I would fix her a cup of coffee. I added cream, but I also added two heaping spoonfuls of salt to her mug. I could barely wait for her to take the first sip and when she did, she grimaced, smiled, and thanked me for the best cup of coffee she ever had.

Moms, amd I right? I was so disappointed that she didn't spit it out in disgust so I could yell April Fools at her. Why did she have to be such a good mom and pretend to like my terrible cup of coffee just to make me happy? Ugh.

I gave up pranks after that, but it didn't stop me from being pranked upon. In high school, one of my close friends and her boyfriend made up an entire prank that they broke up, all to try and fool me. I refused to believe them at first, until they started staging fake fights in front of me and writing each other nasty notes as evidence that they were really over. When I finally believed her and hugged her to tell her it was OK, they both shouted April Fools at me. All of our friends were in on it, and I never trusted anyone ever again.

So basically? I kind of fail at April Fools' Day. (Actually, those surrounding me fail and I'm just a girl trying to do my best to enjoy the holiday and avoid unnecessary pranks.) But whether you're the one pranking everyone like a boss or trying hard not to believe a damn word anyone says on April 1, here are 17 April Fools' Day memes to get you in the spirit. (And to serve as a warning to others: Don't even try your sh*t with me.)