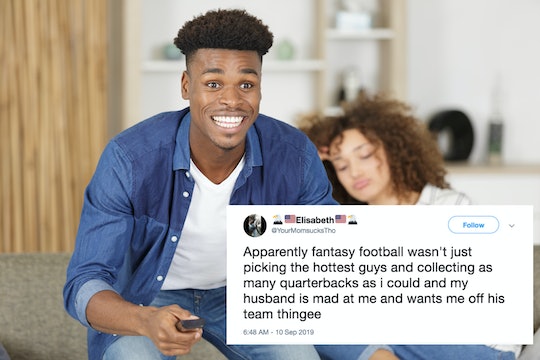 These Tweets About Fantasy Football Husbands Are So Relatable, It Hurts

Each year from September to February, thousands of people drop everything for weeks on end to participate in fantasy football. Because American football is a sport that is notoriously watched by men, it makes sense that many husbands around the country play along. Throughout the season, wives watch as their husbands are sucked into a black hole of the competitive online drama that is fantasy football. It makes sense that hilarious fantasy football husband tweets would be a thing on Twitter where spousal rants typically abound.

I've personally never really understood the appeal of playing fantasy football. Why is picking a team to cheer for and watching them play each week not enough? So much time and energy goes into drafting players, making trades, waivers, and keeping track of stats that it makes my head spin. I'm thankful to be married to a man who is not all that into watching sports, save the occasional baseball game he will watch with me and possibly the Super Bowl, even if it's only for the commercials and halftime show.

I feel like we're actually a rarity among American couples, though. Many wives are forced to handle the whole fantasy football situation in the best way they know how — by posting about it on Twitter. Some couples even play fantasy football together, which creates some fantastically funny tweets as well. Read on to see what all the fantasy football fuss is about where husbands and wives are concerned over on Twitter.