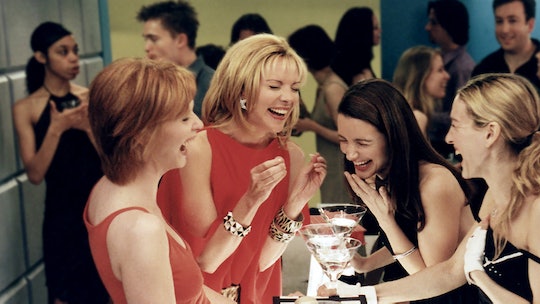 Oh, the reach of Carrie Bradshaw. The fictional protagonist of the epic HBO show sure taught women a thing or two about sex. But, there are times Sex and the City got sex wrong. Like totally, 100 percent wrong. Sure, the show was groundbreaking in the sense that it started a mainstream cultural dialogue about the sex lives of single women. The show wrapped over a decade ago and people are still obsessed with the fab four and the men (and woman or two) they took to bed. You don't need me to convince you that the show has become part of pop culture, and isn't going anywhere, despite its flaws.

But can I pause for a moment to talk about its flaws? Because some of them are more than just moments; they're entire movements. And the popular series totally misrepresented a couple things I'd like to point out. As a total fan of the show, I'm not hating on the Sex and the City. I'm simply pointing out the things the show got wrong about sex to pat culture on the back for evolving. After all, some of these things would never fly on HBO airwaves today. For all of the sex-positive lessons on Sex and the City, there was a lot of finger wagging going on, and the show presented viewers with a set of limited sexual experiences. In other words, it tried its best to be inclusive and sensitive about sex, but had some epic fails. In fact, there were some specific things the series got wrong about sex that I'd like to discuss.