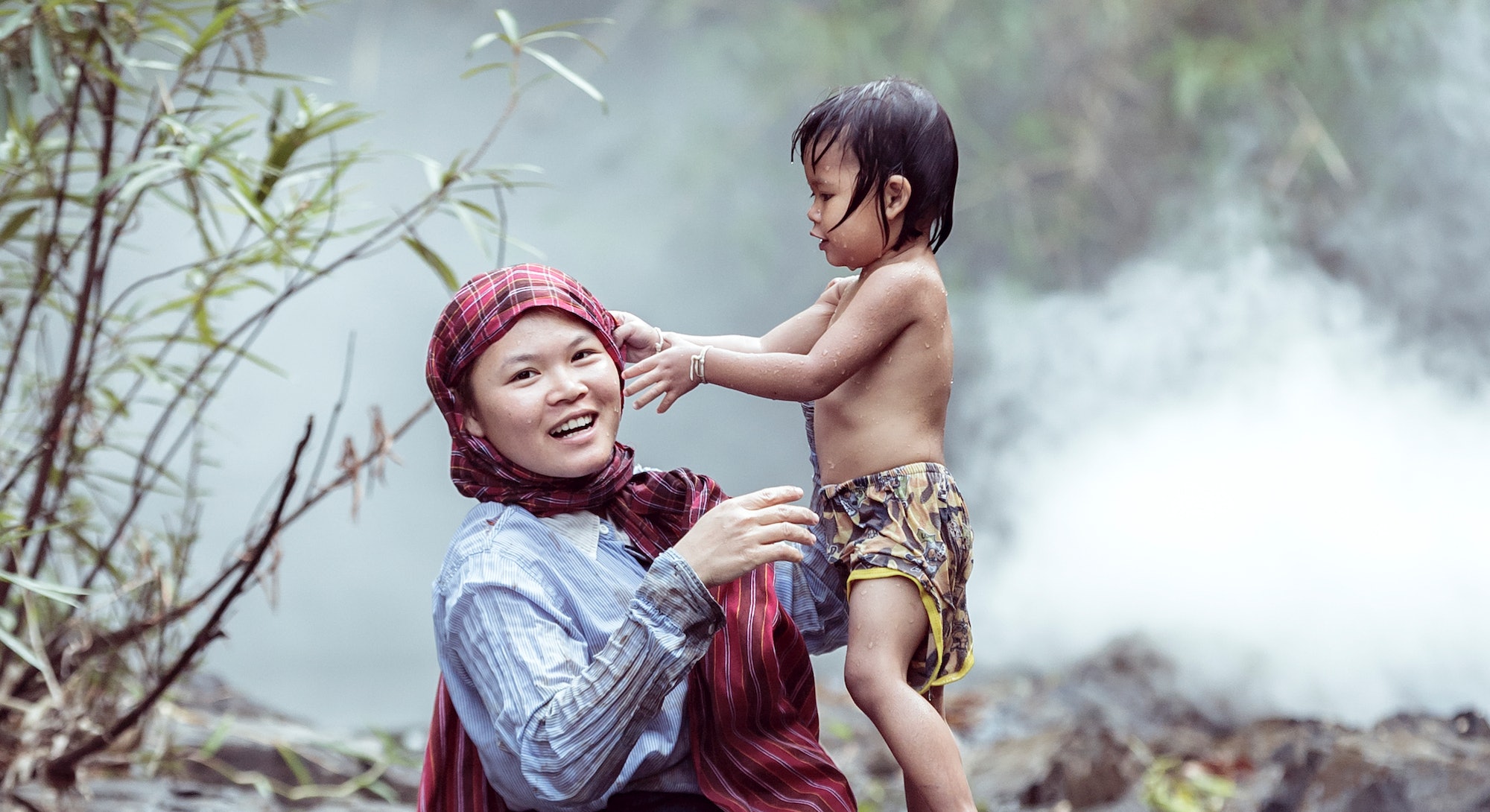 Fearless, protective, nurturing, exhausted, and limitless love are just some of the emotions you might see and feel while looking through this selection of incredible photos of mothers from all around the world. From a rainy day in India, bath time in Laos, and a mother hiking on the Everest Base Camp trek with her baby strapped to her back, these photos celebrate the ordinary and extraordinary things moms do, all while caring for the little people they love.

From the United States to Bhutan to France, a mother's love and ultimate badassery is universal. In fact, as The Week reported in 2013, the word "mama" is universally known and used by babies all across the globe to refer to their mothers. There's also the universal truth that motherhood is hard, overwhelming, and trying as heck.

Each mother's experience, however, is also uniquely different, of course. That's what this photo collection of mothers from all around the world aims to explore, while also highlighting the collective strength, resilience, and deep love recognized in mothers everywhere.

This beautiful portrait features a mother in Bhutan with her baby snoozing away, without a worry in the world, on her back.

This photo captures the protective nature of a mother who is going through cancer treatments, smiling while she carries her little boy on her back.

Above, a mother walks through the rain in India, protecting her little boy in her arms as he rests his head on her shoulder.

This vintage photo from 1935 captures a mother getting her kids to school, no matter what. Wet shoes, skirt, and pantyhose be damned.

Above, a mother from the Hmong ethnic group in Laos is photographed bathing her baby in cooking pot and taking care of his booger business.

A young mother posed for this badass photo of her carrying her baby in a backpack up a portion of Namche Bazaar, a stopping point for trekkers on their way up to Mount Everest.

Every mom is a badass in her own way, like this firefighter mom photographed above.

This little baby squeezing his soldier mom's face in the photo above is the epitome of love.

While climate change activist Greta Thunberg might have been the galvanizing force behind the Fridays for Future protest, the English mom photographed above is teaching her daughter to fight the good fight at a young age.

Imagine climbing a sand dune. Now imagine doing it with a toddler on your back.

This Mongolian mother is a master at multitasking as she churns butter, chats with a friend, and holds her baby on her knee.

Even before babies come home, a mother's strength is put to the test. Like this French mother photographed above, reaching out to hold her newborn moments after giving birth.

The mother photographed above, Dr. Sharon Lin of New York, worked on a sign for the 2018 Women's March with her 8-year old son, Hudson. Young feminists are cultivated exactly this way.

A mother's touch, or skin-to-skin contact, has been proven to benefit babies. This photo of a mother from the Philippines resting with her newborn baby on her chest isn't just beautiful, it shows some important work being done.

A mother and her baby girl braved cold temperatures at the 2018 Women's March in Toronto, Canada to "smash the patriarchy."

Not only does this mother from Bangladesh photographed above have a small baby to care for, but she's also getting some farm work done.

A long road ahead awaits a mom of premature twins, but as this mother holding her babies in the photo above proves, she's got it covered.

Breastfeeding while waiting to hop on the New York City subway, a classic badass mom move.

This photo of a mom in Tanzania feeding her children before herself is a beautiful depiction of a mother's caring nature.