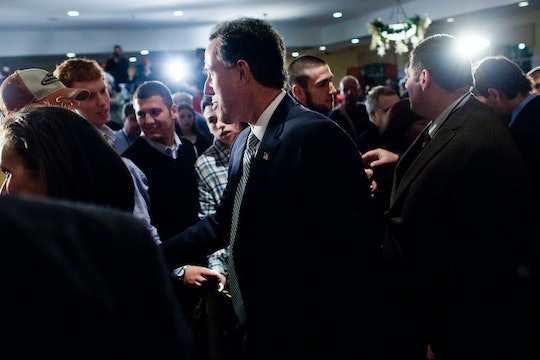 Just about every American that has turned on their radio, TV, computer, or cellphone, or talked to anyone for that matter, in the last month probably knows what day it is: It's Iowa caucus day, of course. On the right — and far right — we have Republican presidential hopefuls Donald Trump and Sen. Ted Cruz leading the field. And the competition is still hot on the evening the first real votes of the 2016 presidential election will be cast. To get some insight into what a win in Iowa means for Conservatives vying for the presidential nomination, lets take a look at which Republicans have won Iowa before.

Going into Monday night's caucuses, things pretty much seemed cemented, with a few far-fetched possibilities sitting at the back of everyone's minds. Trump was leading in the national polls among the Republican candidates, followed by Cruz, who had made a concerted effort in recent weeks to connect with Iowa's evangelical communities (to little avail, unfortunately). But those are just numbers; The real question is, does Iowa really matter? NPR took a look how past winners have faired, and for the Republican party, it's a mixed bag.

For example, in 2012, Rick Santorum was the right's winner in Iowa. But did it make a difference in the long run?

Well, it turns out, Santorum didn't have enough of anyone on his side, and he went on to lose the nomination to candidate Mitt Romney just four years ago. Go back even further to 2008, and you'll find Mike Huckabee won the Hawkeye state's vote, only to lose to John McCain further down the line. You get the point... In fact, former President George W. Bush was the last Republican to win both the Iowa vote as well as the Republican party's nomination, and that was way back in 2000.

So, if the track record of recent Republican nominees who won Iowa going on to secure the Whitehouse isn't really that great, why is there so much emphasis put on the results? Some analysts think its a matter of tradition.

"The importance of Iowa is enshrined in tradition. It's not practical," said Jason Johnson, a professor of political science and communication at Hiram College in Ohio, in a comment to Al Jazeera last month.

The Iowa tradition revolves around a very different process than most American voters experience at the polls when they cast their ballot for the next presidential hopeful: Voters head to a caucus location, listen to speeches, and they they cast their vote through a secret ballot before votes are tallied statewide and a winner is announced.

In the end, after all the hullabaloo surrounding Iowa's place in the presidential race, very few Iowa citizens actually go out and caucus. And with a blizzard warning in effect across much of the state, many had expected even lower turnout this year. (That ended up being a sore estimate, with most outlets reporting record high turnout by evening's end.)

As Iowa gears up to kick off the 2016 presidential election, one thing is clear: The Republicans to watch are Trump and Cruz as they head into caucus night atop the national polls. But regardless of tonight's outcome, the question remains, will the Republican who sweeps Iowa in 2016 buck the trend and notch the Republican presidential nomination? We'll just have to wait and see if right-wingers are wearing Cruz buttons or Trump hats come fall.