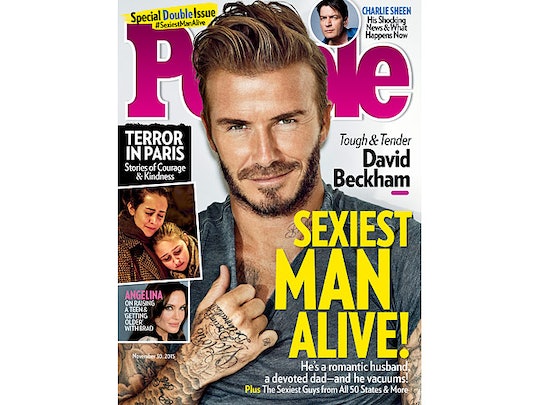 In case you missed it, People has named David Beckham 2015’s Sexiest Man Alive. It’s a little surprising that it’s taken them this long, to be honest. Beckham invaded our shores nearly eight years ago, and was well-known even before that, thanks to his high-profile marriage to my third-favorite Spice Girl, Victoria (aka Posh). Oh, and something about sports? Although men do tend to improve with age (those jerks); a little sparkle of silver at the temples can certainly turn a dude from “Meh, I guess” to “He can get it!”

While I’m definitely not calling Beckham ugly, there is a certain predictability to his being honored. Of the 29 men who have been named Sexiest Man Alive over the years, all but one were white. One! It was Denzel Washington in 1996. I mean, for goodness’ sake, Nick Nolte has won before, but not one Latino? Really? People is clearly fishing from a very small pond; Johnny Depp, George Clooney, and Brad Pitt have each won twice. We get it, People, you think they’re dreamy. But let someone else have a chance for one, huh? Sure, Hollywood is shockingly white, but if you dig just a tiny bit, you’ll find a ton of men of color who are just as deserving as Beckham, if not more so. Time for some eye candy — aka a bunch of hot AF dudes who should be seriously considered next time around.

More Like This
Sarah Levy Reveals Birth Of Her Baby Boy & His Name Is A Sweet Tribute To Her Dad
What Exactly Are Minions, Anyway ?
Megan Fox Explains Why She Asked Machine Gun Kelly If He Was Breastfed As A Baby
Barack & Michelle Obama Shared The Most Adorable Baby Photos Of Malia On Her Birthday