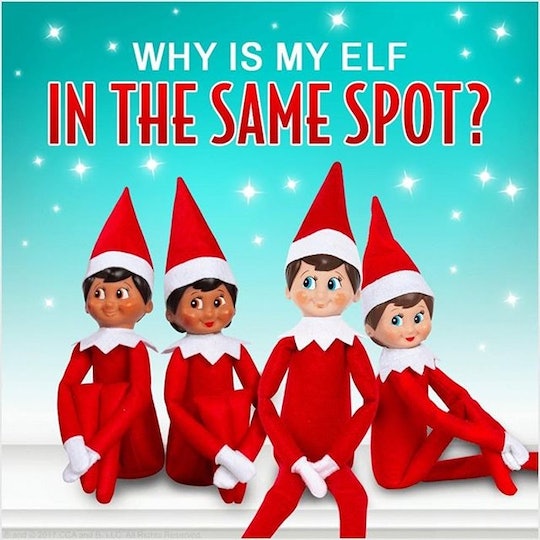 22 Things To Say To Your Kid When You Forget To Move The Elf... Again

It happens. The one (and only) time your kids get out of bed on their own and the Elf on the Shelf is in exactly the same spot he was in the night before. But instead of saying what you might really feel (i.e. “Dudes, it’s just a doll!”), or feeling horribly guilty, you’re going to have to come up with a good excuse when you forget to move your Elf on the Shelf — like, now.

So here’s the deal on why it's so important that your Elf on the Shelf moves every night in the first place. According to lore (aka the official Elf on the Shelf website), Scout Elves travel back and forth to the North Pole each and every night so that they can report back to Santa about everything that happened during the day. You’re bound to slip up sometime, momma. That’s why you should have an envoy of excuses ready just in case something goes wrong.

From blaming your Elf’s lack of movement on him being tired, sick, or stressed, (to even making your kid think he’s seeing things), you can come up with a lot of creative excuses for those times when you forgot to switch up his spot. When you’re in those prickly parenting moments, here are 22 excuses to explain away why Elf on the Shelf didn’t move. Your kid will be none the wiser.