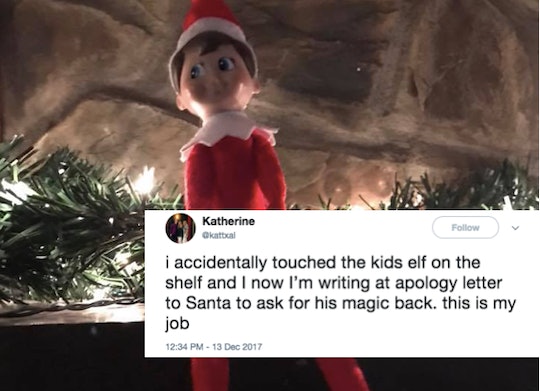 'Tis the season for family, for gingerbread houses you can't keep standing, and for elves that watch your child's every move. If you're not an Elf on the Shelf mom, I get it. My family's pretty into it and my husband loves moving that little guy and finding fun things for him to do. (Unless he forgets, then it's a mad rush in the morning for me to hide it while Paw Patrol holds my kid's attention hostage.) But there's a lot to be said about this holiday tradition, including some hilarious Elf on the Shelf tweets that only parents who invest in the fun will understand.

Disclaimer: our elf is not an *sshole. Meaning he doesn't make giant messes in the kitchen that I have to maneuver around to cook dinner or unravel an entire roll of toilet paper in the name of "fun." (Like, seriously. Some of you have the worst elves ever. This isn't in their job description! What are they doing fighting with Barbie?) But our elf isn't over-the-top either. He doesn't bake cookies or bring gifts or cut out a dozen paper snowflakes to hang in the kitchen. He's... an elf on a shelf. And we move him from spot to spot, sometimes adding a marshmallow in his hands or a candy cane, and our daughter is totally enamored with him.

We make it pretty easy on ourselves, but some of y'all — hoo boy. These hilarious Elf on the Shelf tweets are perfect, whether you make your little guy create an entire tea party vignette with all the teddy bears in the house or if he hasn't moved in a week because you literally can not.

Seriously, You Have Enough To Keep Up With

No, but seriously. Nobody knows the feeling of your heart dropping into your butt like a parent who wakes up at 3:00 a.m. and realizes they forgot to move the elf. Except for the parent who has been awake since 8:00 a.m. listening to their kids whine about how their elf is lazy and has been on the mantle for four days. Oops. Forget the cheat sheet on cool places to hide your elf — where's the cheat sheet of excuses to give your kid when their elf becomes paralyzed?

When You're Just Over The Whole D*mn Thing

Oh, it was so fun on Thanksgiving night when the little guy came back. Reading the book with your kids, having the elf braid tinsel, going on a hunt for him every morning. But now it's like a week until Christmas and seriously, you're over it. If that friend from high school that you only talk to through Facebook could stop posting her daily Pinterest perfect Elf on the Shelf shenanigans, that would be great, too. Much appreciated, Jessica, but now your kids are telling mine that their elf brought them movies and popcorn and also decorated the house with glitter, and I'm losing it.

We've watched the Elf on a Shelf movie, we've bought the book, there are pajamas with the elf all over it, and there are accessories for your own elf, including pets and clothes — you guys. I tell my husband every day that I'll never forgive us for not coming up with this idea.

When Your Kids Take Advantage Of This Whole Thing

Eventually, they're going to realize this elf is a gold mine for them. Plus, they know that they can tell the elf whatever they want for Christmas and his little mouth keeps quiet until he gets to the North Pole. Let's hope they told you the same thing before Christmas morning comes and your kid is crying because Sparkles the elf didn't pass the I-Want-An-iPad memo to Santa.

When You Accidentally TOUCH THE ELF, OMG

Actual conversation I have with my husband every night:

Me: Doesn't it feel weird to touch the elf? Like, it feels very illegal.

Me: I don't like moving it. It weirds me out. I'm not supposed to touch him.

Him: What is wrong with you?

Seriously, we spend all day talking about how if we touch the elf he loses his magic, and then I have to actually hold the thing every night? I'm also terrified I'll somehow accidentally grab it from the top of the bookshelf without thinking and traumatize my child.

Honestly, between the sweaty night wakings wondering if we moved the elf to being terrified I'm going to ruin the magic of Christmas by touching this thing, it's a wonder we do the tradition at all. Oh well. Our enthusiasm will be renewed next Thanksgiving.