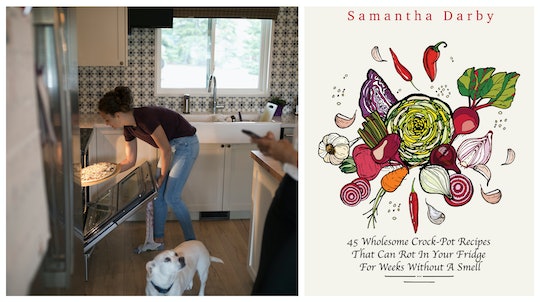 (That pizza is frozen, she just added sun-dried tomatoes "for flair") Getty Images

Somewhere in our kitchen is a casserole dish that has been "soaking" in the sink since Chris Pratt first got buff. We cooked a strata or a lasagna in it, and have been waiting for the chemical half-life of whatever carb it was to erode its remains away ever since. We love cooking here at Romper. We watch The Great British Baking Show and think sincerely about trying to make a proper schichttorte, even if we never actually do it. We trust Ina Garten when she says store-bought is fine (Costco mac and cheese: because nobody has time for a roux, y'all).

We love the ~idea~ of cooking, also looking at pictures of people making wholesome meals for their family, and sometimes watching television shows where famous people eat skewers of street meat with other famous people while we slouch on our couches with SmartPop stuck to our sweaters. We constantly consume articles about nice things a mom might make for her family on a "busy weeknight," but when it comes down to it, we mostly spend our time in the kitchen microwaving hot dogs while listening to podcasts and staring into space.

Evidently, we have a lot to offer the culinary world, like these (free!) 27 cookbook ideas.

Forty-five recipes that look as good being scooped into the bin, uneaten, as they did when you cooked them.

Meals For My Daughter's Daughter

From "Tinned Tuna, Mixed In With Leftovers," to "Something Elsa Tuna" a tome of our favorite sh*tcookery to one day pass down to our daughters, for when they find themselves sorting through ancient cans in their pantry as their children scream in the distance.

This is actually just a list of recipes containing things we have told our children are chicken.

Or you can just leave it in the oven until that stuff turns to carbon.

There is nothing cozier than coming home to a ready-made meal that has been simmering for eight hours, *except* scorching some chickpeas in a stainless steel pot on high.

19 Ways To Cook Tacos That Will Still Be "Too Spicy!" For Your Kids

There are no green bits in the beans or the salsa or the cheese, but hot damn, you've made them too spicy again.

You lost us at "rinse grains prior to cooking."

Brooklyn chef and carb fanatic Janet Manley gets back to basics.

Who Bought Salmon With Bones In It: Fancy Weeknight Dining For Grumpy Urban Professionals

Imagine you're a high-flying consultant for BCG. Now push that thought aside and admit that you're a work-from-home admin with two toddlers and no time for f*cking fish bones.

25 Tomato-Based Dinners To Stain All Of Your Tupperware

Is it even Tupperware if it doesn't have a sheen of orange after one use?

Breakfast For Dinner! Except Just Bowls Of Cereal Because You're Not Ma Ingalls

Samantha Darby takes you inside her disgusting kitchen in beautiful Georgia.

When The Moon Hits Your Eye Like A Big Pizza Pie, That’s A’Enough

Sixteen pizzas to partially make with your kids, for when you have five spare hours to devote to making a single, demented pie.

A lifestyle movement built around being too lazy to unpack the damn thing.

Eating From The Tip Of The Food Pyramid

They will only eat from the food pyramid attic, and who are you to question that.

Why pay for cardboard full of food when you can make Hamburger Helper instead?

Appetizers and entrees made of vegetables and proteins that can be torn with bare hands.

And It Was All Yellow: How To Create A Meal Everyone Under The Age Of 5 Will Eat

From the authors of Noodles Again.

Weeknight Dinners That Won't Harden To The High Chair Like Concrete

He gets some charred corn, and you get to watch clips of the Hot Priest on your phone.

8 Dinner Ideas That Fit Nicely Inside Your Baby's Diaper

Chunks of sweet potatoes and more.

Your kids won't eat it, but that's not your fault — half of these recipes are topped with Ritz crackers, for heaven's sake. You still look like World's Most Wholesome Mom.

Just Put Cheese On It

Maybe they won’t notice what’s underneath, and it will rid your vegetable crisper drawer of the seven half-empty bags of store-brand Mexican cheese blend. (Why do you buy one every time you go?)

43 Things You Can Put On Top Of Rice

Everything looks like a well-plated, healthy meal when it's on top of rice.

11 Uber Eats Faves, Because You Forgot To Defrost The Chicken Again

And then tomorrow you can use Instacart to deliver one (1) red bell pepper for $8.75.

That's it that's the caption.