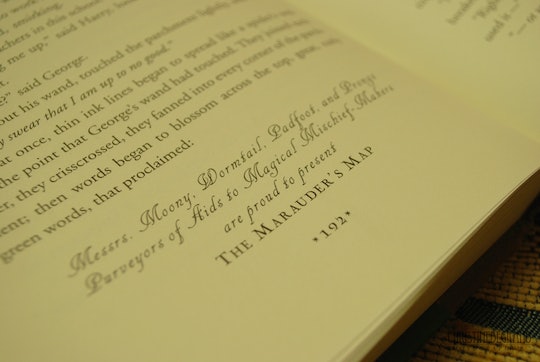 29 'Harry Potter' Quotes That Will Make You A Better Parent

If you're a Harry Potter fan, then there's pretty much a guarantee that you wish you could've attended Hogwarts. Forget having to be 11, I'd enroll in beginner's potions right now if I could. But the more I journey into motherhood, the more I really wish I was a witch. I know you've seen Molly Weasley make dinner and knit sweaters while she's not even in the room. But even though we may not have Harry Potter spells to get us through the day, we can rely on Harry Potter quotes to be a better parent.

Honestly, a good Harry Potter quote can pull you out of just about any slump. J.K. Rowling created more than just a magical world ― she created a world of inspiration. Millions of people around the world have credited Rowling's series as their salvation and their lifeline. And for parents? Harry Potter quotes can do the same. These are the snippets of literature you need when you want to be a better parent, when you're tired of people telling you that you'll miss the chaos and the noise, and for when you're crawling into bed at night, defeated from motherhood's hard parts. Because if there's one thing the Harry Potter series is full of, it's picking yourself up to be the best person you can be when the rest of the world tells you that you can't.

"Just because you have the emotional range of a teaspoon doesn't mean we all have." ― Harry Potter and the Order of the Phoenix

It's hard to understand your kid's freak-outs, right? I mean, why the hell are they crying when you gave them the exact lunch they requested? But just because you don't understand your child's emotional capabilities doesn't mean they aren't valid.

"It does not do to dwell on dreams and forget to live." ― Harry Potter and the Sorcerer's Stone

Too often, I get caught up in the dreams I had of parenting instead of what's happening right in front of me. And I think we're all guilty of that. So take Dumbledore's advice and focus on the present moment, not the dreams you had for it.

"Of course it's happening inside your head, Harry, but why on Earth should that mean it is not real?" ― Harry Potter and the Deathly Hallows

Another reminder that your child's imagination is everything. Nurture it! Let them tell you their thoughts, their feelings, their wacky little made-up stories. All of it.

"It matters not what someone is born, but what they grow to be." ― Harry Potter and the Goblet of Fire

When my daughter was born, I worried constantly about her being born to a parents unhappy in their marriage. But I'm learning very quickly that it doesn't matter what environment she was born in or what kind of person I thought she'd be, she's going to grow up to be her own self, no matter what.

"Not my daughter, you bitch!" ― Harry Potter and the Deathly Hallows

Because you're a mama bear and keeping in mind that Molly Weasley once decimated a Death Eater for hers will make you want to fist-pump for stepping up to the mean kid on the playground.

"You sort of start thinking anything's possible if you've got enough nerve." ― Harry Potter and the Half-Blood Prince

Like taking your kid to Target without a nap.

"We are only as strong as we are united, as weak as we are divide." ― Harry Potter and the Goblet of Fire

You and your partner have to rally together and show a united front to those children or they will eat you alive.

"It is our choices, Harry, that show what we truly are, far more than our abilities." ― Harry Potter and the Chamber of Secrets

You may not be the Pinterest craft-mom and you may always be late getting your kid to pre-school, but every day you make a choice to be a badass mama and to do the very best you can.

"I solemnly swear I am up to no good." ― Harry Potter and the Prisoner of Azkaban

"Let us step into the night and pursue that flighty temptress, adventure." ― Harry Potter and the Half-Blood Prince

Stay up late with your kids! Plan outings and games and indoor picnics. Parenting is an adventure and you should always pursue it.

"Things we lose have a way of coming back to us in the end, if not always in the way we expect." ― Harry Potter and the Order of the Phoenix

Like your patience. And your energy. And all of those socks that go missing. (LOL, just kidding about the socks. They're gone forever.)

"One can never have enough socks." ― Harry Potter and the Sorcerer's Stone

Speaking of socks. These are wise words from Professor Dumbledore and will make you an infinitely less-stressed parent if you just keep buying the socks.

"Working hard is important, but there is something that matters even more ― believing in yourself." ― Harry Potter and the Order of the Phoenix

You can do all of the things you think you "should" be doing to be a good parent, but if you don't believe in your own worth as the best mom your kid could ever ask for, then you won't get anywhere. Believe in yourself. You've totally got this.

"Just because it's taken you three years to notice, Ron, doesn't mean no one else has spotted I'm a girl!" ― Harry Potter and the Goblet of Fire

Your kids are going to grow up and you're going to be totally confused as to how in the hell it happened. Best to keep a look out so you can be the first one to notice.

"Well, he should have some chocolate, at the very least." ― Harry Potter and the Prisoner of Azkaban

I mean, this is just sound advice all around. But if you're feeling like you need a pick-me-up to make it through a day of parenting or if your kid is being particularly whiny, go for the chocolate.

"The mind is not a book, to be opened at will and examined at leisure. Thoughts are not etched on the inside of skulls, to be perused by an invader. The mind is a complex and many-layered thing." ― Harry Potter and the Order of the Phoenix

Sometimes your kids don't want to talk to you. They don't want to tell you what they're thinking or why they're upset. They just want to be in their own head for a while, and that's totally fine. This quote's also helpful when you're panicking about their brain development and the fact that their friends can count to 10, but your kid just wants to yell BOOGER instead. Stop picking apart their sweet little minds.

"Happiness can be found, even in the darkest of times, if one only remembers to turn on the light." ― Harry Potter and the Prisoner of Azkaban

Parenting has some dark moments, doesn't it? But you have to find the happy little things. Sure, your kid whined and spilled finger paints all over the floor and refused to eat, but then you find their art project that says "I love mom" and everything is right again. Look for the happiness ― it's the only way to survive the dark days of parenthood.

"It is important to fight and fight again, and keep fighting, for only then can evil be kept at bay though never quite eradicated." ―Harry Potter and the Half-Blood Prince

We all battle our own insecurities as parents, but you have to keep fighting against them every day. The more you beat them down, the better you'll be as a parent.

"Indifference and neglect often do much more damage than outright dislike." ― Harry Potter and the Order of the Phoenix

Not that you ever show disdain and dislike for your child, but everyone is guilty of showing indifference and even neglect. You'd never put your child in harm's way, but neglecting their ideas and opinions, being indifferent towards their excitement and eagerness is just as damaging.

"It is my belief... that the truth is generally preferable to lies." ― Harry Potter and the Goblet of Fire

And obviously we're not talking about lies like Santa or the Easter Bunny. But being truthful with your children is so important.

"Have a biscuit, Potter." ― Harry Potter and the Order of the Phoenix

You're probably being a cranky parent because you haven't eaten. Have a biscuit, Potter.

"We must try not to sink beneath our anguish, Harry, but battle on." ― Harry Potter and the Half-Blood Prince

No rest for you, mama. You have to keep on, regardless of how hard it is right now. There's no quitting or giving up in parenting, only battling on and making it happen.

When it comes to protecting our children, we'll do anything, but sometimes it's hard to explain to your uncle why you won't let them "steal" kisses from your child, or to your grandma why your kid can't have ice cream before dinner. It takes bravery and courage to be the one against those you love, but you do it because you have to.

"Constant vigilance!" ― Harry Potter and the Goblet of Fire

I mean, if you have a kid, you have to live by this quote.

"But that's what Hermione does. When in doubt, go to the library." ― Harry Potter and the Chamber of Secrets

And it's what you should do when you're in doubt. Pack those children up and let them read some books. It can fix anything.

"It is a strange thing, but when you are dreading something, and would give anything to slow down time, it has a disobliging habit of speeding up." ― Harry Potter and the Goblet of Fire

You don't want them to grow up, yet there they go, turning into toddlers and pre-schoolers and kids and teenagers right before your very eyes. Keep this quote in mind when you're about to lose it.

"What's comin' will come, an' we'll meet it when it does." ― Harry Potter and the Goblet of Fire

Don't stress about pre-school if it's not time yet. Don't worry about your children dating or getting into college or if they're going to hate you when they're 15. Focus on the present, because whatever is going to happen will happen and you can take care of it all then.

"By all means continue destroying my possessions. I daresay I have too many." ― Harry Potter and the Order of the Phoenix

The minute you realize that nothing belongs to you anymore, the less frustrated you'll be when your child opened the fridge to dump out all of that fancy cheese you just bought.

"Love as powerful as your mother's for you leaves its own mark. To have been loved so deeply, even though the person who loved us is gone, will give us some protection forever." ― Harry Potter and the Sorcerer's Stone

Loving your child as fiercely and deeply as you can is their best protection. Keep it up, mama.