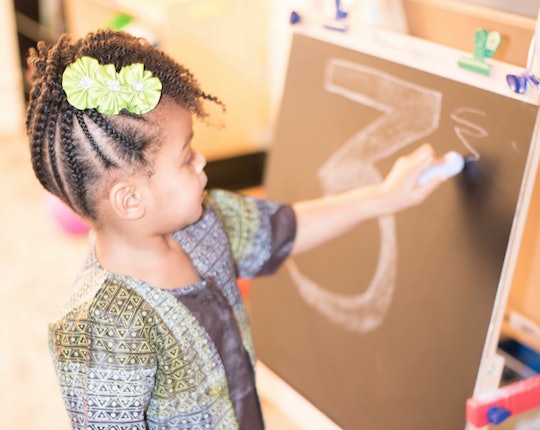 Teary-eyed from joy, I ripped the bow from the front of the tricycle. “It’s time to take this baby for a spin around the neighborhood!” For her third birthday, we had purchased a tricycle with a silver bell and red polka dots along the handle bars. Until now, we couldn’t imagine her using those two little precious legs to power the pedals. She was confused at first, feeling her way around the new trike. Once she started to move, she screamed “Yay! I ride bike, Mommy.” And that’s when I knew that 3 was going to be the best age.

Three... the best age? How, sway? I don’t have many other years to compare to (my daughter is now 4-and-a-half). However, friends and family had been giving unsolicited warnings about age 3 from the moment she turned 2. “Terrible twos ain’t got anything on 3!” was the general vibe. In preparing for the worst, I began daily affirmations — most of them very clichéd. In fact, I tell myself frequently that every age is uniquely magnificent. Each opportunity I have as a parent to witness my child’s growth and development is a blessing that I should never take for granted. For instance, I cried when my daughter first chuckled at 6 weeks. And then, of course, I examined the symbolism of her learning to walk at 9 months. Admittedly, year two was a total blur. But I believe the thrashing threes — an anticipated age of terror — is actually the very best age during the early years of development.

Have you ever listened to a 3-year-old tell a story?

Age 3 is when my daughter showed a genuine interest in helping with tasks around the house. An opportunity to practice sorting colors, she loved separating the seemingly endless piles of laundry. While she still mixed some colors with whites (and tossed clothes everywhere if she happens to be tantruming), I appreciated her insistence on helping me. About time, girlfriend! After changing nappies and wiping spills for a few years, it’s about time you started pulling your weight around here.

I realized that it didn’t have to stop at laundry, so I also gave her small duties in the kitchen (assisting with food prep and being my number one taste tester). A brutally honest “yuck” or “no, no, no” saved me the embarrassment of serving a dish that was under- or over-seasoned.

Although she might have been candid with me in some instances, 3 was the first time I heard my tiny human tell a grand lie. Have you ever listened to a 3-year-old tell a story? The hyperbole and attempted grand mastery of words is simply fascinating. “How’d that mound of boogers get on the wall next to your bed?” Only a 3-year-old responds that they, “Jumped from nose, Mommy!”

Surprisingly, her response wasn’t “Why?” A question for a question was a game we played the entire age of 3. I couldn’t be any more satisfied, though, because constantly asking “why” reflects a naturally heightened curiosity.

What’s not a win at this age? Tantrums. In fact, they seemed to be more dramatic than the 2-year-old outbursts. There’s good in everything, right? No matter how nasty 3-year-old tantrums get, this stage is slowly coming to an end. Sike! While 4 brings its own set of challenges (tantrums still included), you’ve got about one more year until all the “thrashing” of the threes finally lets up.

I feel like age 3 tested my patience the most. There’s no medal for conquering the troublesome threes. There were lots of ugly tears (from the both of us!). But, with the joys of 3, such as new friends, more activities, and more words, I have to admit it was the year we finally took off, bell ringing.

More Like This
30 Easy Summer Activities For Kids That Work Rain Or Shine
The Covid Vaccine For Kids Under 5 Has Been Sent To The FDA For Review
Should Parents Consider Delaying Covid Vaccines Until Closer To School Starting?
Viral TikTok Breaks Down How Beautifully Bluey Depicts One Character’s Infertility