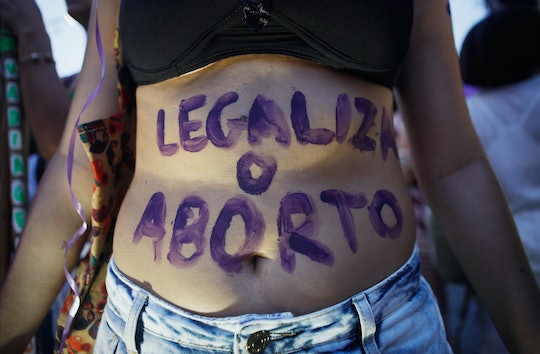 How To Respond To Arguments About Late-Term Abortion

Anti-abortion lawmakers love to twist science to introduce and pass legislation that severely restricts a person's access to abortion. Many of these bills-turned-laws deal with so-called "late-term" abortions, which happen typically after 20 weeks of pregnancy. Abortion opponents love to evoke medically inaccurate terms like "fetal pain" or "partial birth" to justify bans on the procedure. In fact, here are just four arguments against late-term abortion and how to respond to them.

"Late-term abortion" is not actually a medical term. It's a catchall phrase to describe the procedure when it takes place in the second and third trimesters. (The more accurate description of the procedure would be "later abortion.") Antiabortion activists came up with the misleading term as a way to try and convince people that abortions happen all the way up to the last weeks of pregnancy. It's worked in a lot of ways; according to the Daily Dot, 15 states have enacted laws banning abortion after 20 weeks of pregnancy. Many other states have limited access to abortion so much that it becomes impossible for a pregnant person to undergo the procedure after that point.

All of these four arguments used by anti-abortion proponents are not rooted in science. So if you find yourself in a debate, here is what you need to prove them wrong.

Common Argument No. 1: "In the ninth month, you can take the baby and rip the baby out of the womb of the mother. Just prior to the birth of the baby."

Your Response: That quote is brought to you by President Donald Trump, who made that infamous comment when discussing late-term abortions during the final presidential debate on October 19. Your response to this argument is pretty simple:

Common Argument No. 2: Late-term abortions are wrong because the fetus can feel pain in the second and third trimesters.

Your Response: Many conservative lawmakers who push "heartbeat bills" claim that fetuses can feel pain after 20 weeks of gestation, but that's not scientifically accurate — or proven. A person senses pain because of the body's nervous system and, according to a 2005 review in the journal JAMA, the fetal nervous system doesn't develop until the third trimester — specifically at the 29- or 30-week mark. Nerve cells extending from the spinal cord reach the brain between 23 and 24 weeks, but it's not enough to produce the feeling of pain, Live Science reported in May of last year. When you look at the science, the fetal pain argument falls apart.

Common Argument No.3: But most late-term abortions take place in the third trimester.

Your Response: No they don't. According to Planned Parenthood, 99 percent of abortions occur before 21 weeks. That means only one percent of abortions performed in the United States happen in the later part of the second trimester or in the third trimester. That makes late-term abortions rare, which makes state laws restricting abortions after the 16-week or 20-week mark unnecessary.

Common Argument No. 4: Late-term abortions are morally wrong because the fetus is living during the abortion procedure.

Your Response: "Partial-birth abortion" is not a thing. It's a term made up by anti-abortion group the National Right to Life Committee (NRLC) in the mid-1990s to politicize and stigmatize a legitimate medical procedure known as "dilation and evacuation," according to NPR. Dilation and evacuation — also known as an D&E — is a procedure that happens in the second trimester in which the fetal and placental tissue is removed with the combination of instruments and suctions. In some case, the fetus is removed intact (called an intact D&E); according to Our Bodies, Our Selves, intact D&Es, which are rare, occur when the fetus has abnormalities and the person having the procedure wants to hold the fetus and say goodbye. In either case, the fetus is not alive, so "partial-birth abortion" is an anti-abortion lie.

Antiabortion proponents, especially in Congress, often don't listen to facts and propose laws based on morality rather than science. But that doesn't mean you should stop fighting for the truth, and these four responses should make it easier for you to do so.