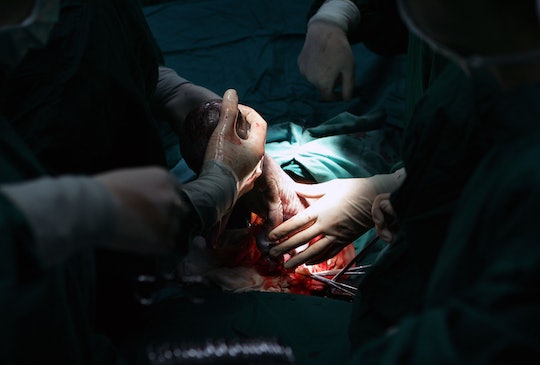 What It Means To Make C-Sections A Pre-Existing Condition

Sometimes when I hold my son, I'll whisper "I'm sorry" in his ear. With my eyes wet with tears, I'll tell him I'm sorry that my body wasn't strong enough for him — that I had to have an emergency C-section in order to bring him into the world. I feel guilty, as if I failed him because I couldn't deliver him vaginally. Take 10 minutes online, and you'll find others who feel the same. Cesarean sections are treated as shameful, which is why making C-sections a pre-existing condition only further stigmatizes them. And that's the last thing parents like me need.

On Thursday, the House passed the last version of the American Health Care Act, which was revived last month after Republican Congressman Tom MacArthur of New Jersey tacked on an amendment that would give states the right to opt-out of key Affordable Care Act provisions. That includes the regulation banning insurers for discriminating against people with pre-existing conditions. Under this new GOP bill, that list of conditions includes C-sections, along with domestic violence and rape. According to Forbes, the AHCA — aka Trumpcare — will only cover 5 percent of Americans with pre-existing conditions.

People like me who've delivered via C-section are already stigmatized for having the procedure, whether by choice or emergency. We're made to feel less than because we didn't deliver "the natural way." To add it to the list of pre-existing conditions reinforces that message.

According to the U.S. Centers for Disease Control and Prevention, 32 percent of all births were delivered by C-section. Thirty-two percent is not a small number. Yet, people who've had C-sections are treated as if they've done the worst thing they could do by their child. Take, for example, this 2004 interview with actor Kate Winslet. According to the Guardian, the Titanic star admitted she lied about how she delivered her first child, daughter Mia, in 2000. When Mia was first born, Winslet told the press that it was an "uncomplicated natural birth," even though she actually had an emergency C-section.

Why did Winslet lie? She said it was because she "felt like a complete failure" for not delivering vaginally. "I was so completely traumatized by the fact that I hadn't give birth," she said 13 years ago.

But where does this message of failure come from? Friends, family, loved ones, and strangers. Just read this round-up of offensive things said to moms who've had C-sections published by HuffPost Canada last year. Among the comments: "You didn't really give birth; you just had surgery," "You took the easy way out," and "Real moms push."

When former President Barack Obama enacted the Affordable Care Act, he made discrimination in health insurance (mostly) a thing of the past. Prior to the ACA, rape, domestic violence, pregnancy, and C-sections were all considered pre-existing conditions by insurance companies. As Think Progress reported back in 2009, insurance carriers could either deny you health coverage for having a C-section, or they could charge you more. Why? Delivering by C-section increases the chances that you'll have another one and insurers just don't want to pay. That left hundreds of thousands of pregnant people, especially poor and marginalized parents-to-be, without access to adequate health care.

With the passage of the AHCA, Republicans are telling parents who've had C-sections and other people considered to have a pre-existing condition that they are a burden — that they don't have a right to insurance coverage, or affordable insurance coverage. But I and millions of others are not burdens. We deserve accessible and affordable health care. That should not be taken away because we gave birth a different way.