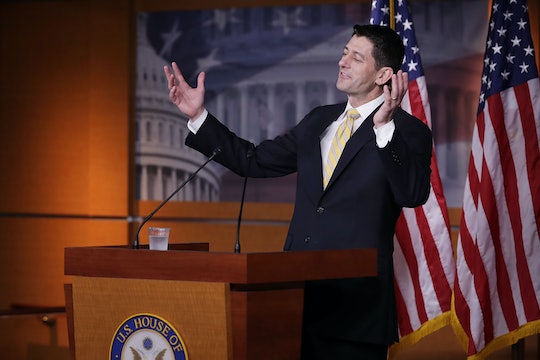 Will The New AHCA Pass? It's Only Slightly Different

This week, conservative lawmakers revived the American Health Care Act after an amendment introduced by Republican Congressman Tom MacArthur of New Jersey pushed the bill further to the right. But is that enough for this version of the GOP's legislation to repeal and replace the Affordable Care Act to survive? Will the new AHCA pass? The GOP is optimistic because it won over the House Freedom Caucus, but conservatives will need more than the support of anti-establishment Republicans to carry them to victory.

House Republicans pulled the previous version of the American Health Care from consideration in March after they failed to secure enough votes for its passage. That was due in large part because the Freedom Caucus — a group of 40 or so conservative and libertarian congress members — wouldn't back the AHCA. With the MacArthur amendment in play, the Republican group has endorsed the bill.

According to FiveThirtyEight, gaining the Freedom Caucus's support suggests most of its members will vote in favor of the AHCA if and when it's brought to the House floor. But that may not be enough to actually save the legislation. As FiveThirtyEight noted, the GOP would still need to win over more moderate Republicans, which is a tougher task.

But it's not looking good for the GOP. According to The Hill's update whip list, 19 Republicans, including members of the Freedom Caucus, have said they will vote "no" on the new version of the AHCA as of Thursday afternoon. Fifty-eight Republicans — some of whom were hard "nos" in March — are now undecided, while nine have said they will vote "yes" on the GOP's bill to repeal and replace the Affordable Care Act. No Democrats are expected to vote for the legislation, which means the GOP could only afford to lose 22 Republicans to the other side, according to The Hill.

The reason why the MacArthur amendment won over the Freedom Caucus is simple: It would allow states to opt-out of key provisions of the Affordable Care Act. The amendment is not a full ACA repeal, but it's enough to please far-right and libertarian Republicans. If the AHCA passes with the amendment, insurers in states that have waived regulations won't be obligated to cover people with pre-existing conditions or essential health benefits like maternity care and preventive services, according to Vox.

That, though, does not apply to congressional staff. A Vox report published Tuesday exposed a exemption in the amendment that would shield members of Congress from the ACA repeal. In other words: They would get to keep the benefits millions of Americans would lose.

The revised version of the AHCA could come up for a vote as early as Friday. But if the GOP is once against short in votes, that could mean their attempts to repeal the Affordable Care Act would be shelved for good.