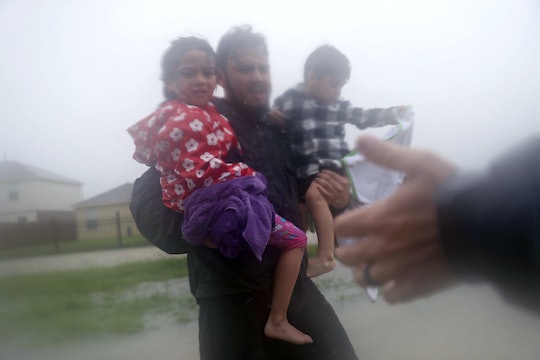 While Hurricane Harvey may officially be over, much of east Texas is still dealing with the devastation caused by catastrophic flooding and rainfall that has yet to abate. According to CNN, more than 30,000 people have been displaced into shelters by the storm, and Save the Children estimates that as many as 40 percent of those in shelters are children. The organization also estimates that up to 1.5 million children could be affected in the days and weeks to come, as they live in counties officially declared disasters. For those wondering how to help kids in the region, here are four children's shelters and organizations to support after Hurricane Harvey.

In the wake of natural disasters, children are affected in ways beyond the basic needs of food and shelter. Save the Children is spearheading the effort to provide relief to children affected by Hurricane Harvey. While it's still a major international relief organization, it's not as broad in scope as say, the American Red Cross. Its efforts directly support and affect children who have been impacted by disaster, and they have boots on the ground in Texas delivering supplies to shelters, setting up child-friendly spaces, and sending staff trained to help children cope after natural disasters. Here are three more organizations helping kids affected by Hurricane Harvey.

When disaster strikes and a family is forced to evacuate, it's understandable if they forget to grab the diaper stash before heading to shelters. While most adults don't have to worry if there will be a bathroom for their use at a hurricane shelter, babies and toddlers don't have that luxury. The Texas Diaper Bank steps in to fill that need, and it seeks donations of diapers and cash to help out those families in need.

Houston's own "meals on wheels" for preschool children serves the more than 26 percent of children in Harris County, Texas, experiencing food insecurity. While its distribution center is currently closed due to flooding from Harvey, Kids' Meals will be back out delivering free meals to preschoolers as soon as it reopens, according to its Twitter — and it needs help. Donate to Kids' Meals online.

Located in Houston, Texas Children's Hospital braced for the storm by rotating 12-hour shifts before the storm made landfall, and even helped to bring in and house women with high-risk pregnancies with imminent due dates. On Facebook, Texas Children's Hospital has encouraged those who wish to help to donate to the hospital as it worked to figure out specific, actionable ways to help hospital patients, staff, and their families.

While whipping out your phone to text a donation to the Red Cross seems like an easy way to contribute, you're better off donating to local organizations providing hurricane relief, as they are dealing with the communities impacted by Hurricane Harvey in the immediate — and the babies and young children of east Texas need every ounce of support they can get from around the country.