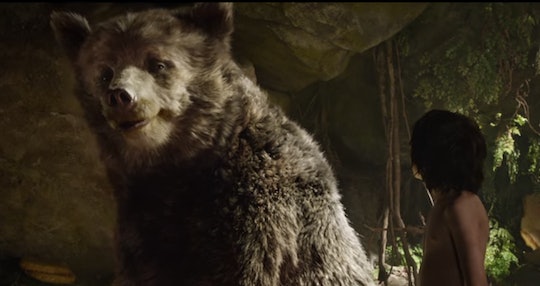 4 'Jungle Book' Characters Who Should Be Your Squad Goals

I don't think a person can get everything they need from just one friend, which is why #squadgoals are a thing now. You need friends who make you laugh, friends who make you cry, and friends who let you off the hook when you want to spend the day binge watching old episodes of "The Mindy Project." I think The Jungle Book has some epic squad goals, maybe even more than Taylor Swift's squad. That's right, I said it.

The latest version of The Jungle Book is due out in theaters on Friday, and, by all accounts, this new live-action version directed by Jon Favreau (Iron Man, Elf) is fantastic. The Disney movie based on Rudyard Kipling's classic tale of a young boy named Mowgli who is raised by wolves in the jungle is sure to be a family favorite, especially considering the star power behind it. Bill Murray, Idris Elba, Scarlett Johansson, and Ben Kingsley are just a few of the actors lending their voices to the movie.

Mowgli has basically the best friends a kid can have if he wants to survive in the jungle, or anywhere else, to be honest. Other than my real life goal of hanging out with Tina Fey and Julia Louis-Dreyfuss, talking animals are basically the only other friends I would want to add to my own squad. Here's why some of the Jungle Book characters would make amazing friends.

OK, so Bagheera (voiced in the new movie by the silver-tongued Ben Kingsley) might not be as much fun as some of Mowgli's other friends. But he is that friend you actually need — the voice of reason. He alone seems to fully understand that Mowgli needs to go the "man-village" to protect him from the menacing tiger, Shere Khan. Bagheera might not be the friend you want to hang out with at the party all night... but he's the one who will get you home safe and sound. Probably with a little lecture about responsibility, but still.

Kidnapping aside, King Louis (Christopher Walken, doing his best wise-guy impression) would be a blast to "hang" with at a party. First of all, dude has some singing chops. He also has a barrel of monkeys at his disposal, literally. So you know you don't get much better than that. King Louis is that fun, dynamic friend who is always going to encourage you to play hooky, go to the beach, have one more piece of cake, etc. He is the enabler friend. Since I am the enabler in my own squad, I put a lot of stock in that quality.

You should always count your mom as one of your squad, kids. Raksha (Lupita Nyong'o), Mowgli's adoptive wolf mom, is that person who is fiercely loyal and will take a hit for you time and time again.

Everybody needs a friend like Baloo who's laid back and cool. It's also important to to note that, at least in the new movie, he's a talking bear with the sleepy/happy voice of Bill Murray. Baloo understand the "bare necessities" of life. Baloo is that guy who is always on your side simply because you're one of his people. He's going to fight off tigers for you (even if he's terrified), save you from snakes with confusing, sexy voices (Scarlett Johansson, I mean you), and just always be in your corner. He's an all-around type of friend.

So take note, guys. The Jungle Book is even better than Instagram, Twitter, or Snapchat when it comes to #squadgoals inspiration. Because talking animals and Bill Murray. Check out the trailer below in the meantime.