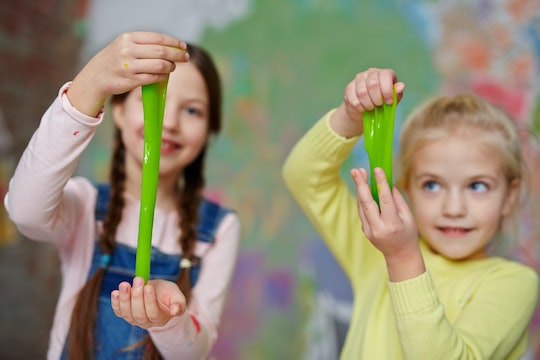 As a mom of two toddlers, I place high value in crafts that can keep my kids occupied for longer than three and a half minutes. Toddlers learn through touch and making messes, so the "slime phenomenon" isn't surprising in the least. However, many moms (myself included) are hesitant about trying out the traditional slime recipes that contain ingredients like borax, shampoo, shaving cream, and other chemical laden ingredients that might not be the best for our littles' skin. Luckily, there are a few safe alternatives to slime that work just as well as the "real deal" without any of the chemicals.

After a recent incident where one little girl's hands broke out in a severe burn after playing with slime made with borax, the internet is (rightfully) freaking out, and many moms are hesitant to make slime for their kids out of fear of what happened to 11-year-old Kathleen Quinn. Although most experts claim that borax is classified as a "mild irritant" when diluted properly and not ingested, and that it shouldn't cause this kind of reaction in the vast majority of kids, the fact that it has the potential to be so harmful should raise a few eyebrows.

According to one article from Parents, some pediatricians caution against using slime containing borax simply because of the "what if" factor and the fact that most kids will likely put their hands in their mouth at some point while playing with it. If you're looking for a safe alternative to typical slime recipes, don't worry, there are plenty of other options made with (non-burn-inducing) ingredients that you likely already have around the house.