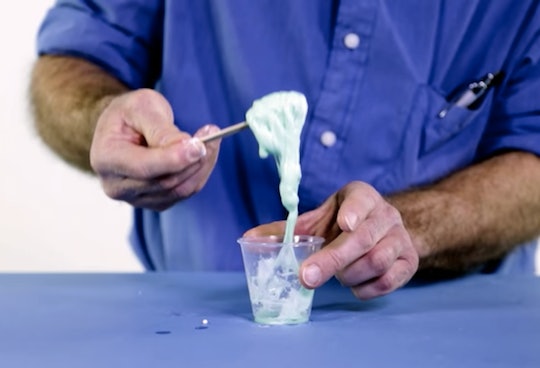 Is Homemade "Slime" Safe? A Scary Incident Is…

Getting your kids interested in science can be hard sometimes, but home experiments that create actual toys is a good place to start. One classic chemistry project that's been making the rounds of late is homemade "slime," which is concocted using a simple glue and water mixture. Now, however, one kid's scary incident is causing some parents to wonder if homemade slime is 100 percent safe or worth the possible consequences it might bring with it.

Kathleen Quinn, 11 years old, had just finished her own batch of homemade slime when she started to feel her hands tingle. As she cried out to her parents, they noticed that her hands were turning red and slowly blistering. Immediately, Kathleen's parents rushed their daughter, who was in excruciating pain, to the emergency room.

“She was like crying in pain, ‘My hands hurt, my hands hurt,’” Siobhan Quinn, Kathleen’s mother, told CBS Philly. Luckily, the Kathleen is slated to make a full recovery, despite her ordeal. But no one should have to suffer through third degree burns for a batch of homemade slime.

For their part, Kathleen's doctors think that Quinn had an extreme reaction to Borax, one of the ingredients in the mixture. Homemade slime is made by combining water, liquid glue, possibly food coloring, and, of course, Borax. Borax is not boric acid and is generally safe. People use it for laundry detergents and homemade hand lotions. So how did it burn Kathleen's hands so badly?

When you set out of make slime, it's important to dilute Borax with water before you start playing around with it, so it's likely that Kathleen didn't dilute the Borax properly or that had a specific allergy to the substance. Borax isn't a carcinogen and actually can't even really penetrate skin that well. It's classified as a "mild skin irritant" and the amounts used to make slime aren't enough to be toxic. It's made of water, sodium, boron, and oxygen — sort of like baking soda or any other type of salt.

In general, Borax is safe. But if you're setting your kids up to make some slime, you might want to make sure they understand that diluting Borax is essential to the recipe (and their safety) or have them wear latex gloves while they work. A box of gloves is pretty cheap and they can pretend it's part of a "mad scientist" costume — they don't have to know they're actually for their own safety in case they also have an allergic reaction to the Borax. There are also recipes out there for slime with alternative ingredients that turn out to look and feel similar as the classic recipe.

If you're super worried about an allergic reaction or don't feel comfortable having your children play with Borax and glue, you can always shoot for homemade play-dough, which you can make from flour, salt, and water. As long as they don't have a severe gluten allergy, there's no way any of those ingredients are going to cause any harm.

Otherwise, don't stress too much about Borax. It's a shame that Quinn had to go through such a horrible and scary experience, but it's a good reminder to take some extra safety precautions with your own slime creations.