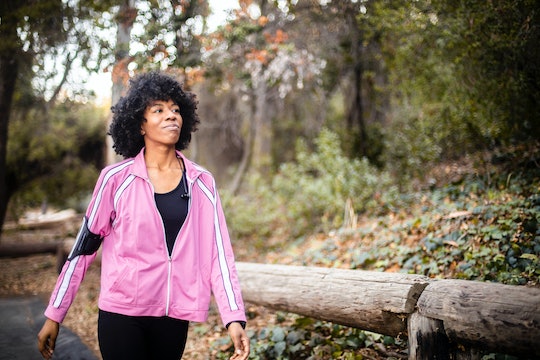 Oftentimes, walking is treated as a way to ease the body into running, as if walking in and of itself isn't good enough. In reality, there are quite a few benefits of walking over running that make it just as great of an activity for the mind and body. In some cases, the benefits of walking actually outweigh those of running.

The narrative that running is better than walking is far from true. Anita Mirchandani, M.S., a certified fitness professional and prenatal/postnatal exercise specialist, tells Romper that walking "hits all the same muscle movements" as running, and that in terms of general health, any movement is good. Additionally, a study published in the journal Arteriosclerosis, Thrombosis, and Vascular Biology found that when performed at equivalent energy expenditures, walking and running equally reduce the risks of "hypertension, hypercholesterolemia, diabetes mellitus, and possibly CHD."

There are also some well-known reasons why a person may opt to walk rather than run. For instance, Miguel Cunha, DPM and Founder of Gotham Footcare, tells Romper that walking puts less pressure on the joints than running does because it's a lower impact sport.

"The impact that occurs with every step when running increases the force placed on your feet up to 2.5 times your body weight, which can place tremendous stress on the muscles, bones, ligaments and joints of your feet," he explains.

If you're lucky enough to not have to worry about your joints, impact isn't the only thing that walking has over running. Here are four other surprising benefits of walking that aren't true for running.