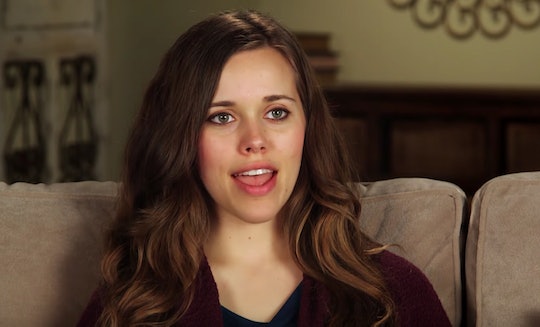 Jessa Duggar knows a thing or two about being in the public eye. Since she was a teenager, she has starred on her family's reality shows on TLC, 19 Kids & Counting and then on its spinoff series, Counting On. Of course, the mom of two never asked to be criticized by starring on the show, but since social media makes it a lot easier for fans to connect with their favorite reality stars, they haven't been afraid to come after her — mainly when it comes to her choices as a mom. Luckily there have been plenty of times when Jessa Duggar shut down critics in an expert fashion, proving that she has a lot of experience at firing back at mom-shamers.

Who knew that when Jessa gave birth to her first son — named Spurgeon Elliot Seewald — with her husband, Ben Seewald, in 2015, she would open herself up to some harsh criticism about her parenting style. When she gave birth to their second son, Henry Wilberforce, almost a year and a half later, this criticism continued. Sure, Jessa willingly puts herself out there on Instagram for her fans to see (and therefore critique), but it's not an invitation for people to throw hate her way.

Luckily, by now, Jessa is almost an expert at shutting down haters and it's easy to see, based on her comebacks, that nothing will get her down.

Just because Jessa's parents, Michelle and Jim Bob Duggar, are well known for their ever-expanding family (they have 19 kids together), that doesn't mean that Jessa will do the same. The mom of two has been open with her fans about every one of her pregnancies and would likely tell them if she were to become pregnant again. But, recently, some fans speculated that Jessa was hiding something from them, and have even gone as far as to accuse Jessa of being pregnant.

Late last week, according to CafeMom, Jessa took to her Instagram story where she explained that her body's shape and "bump" was not because of a baby but because of her postpartum body. "#thanksforasking," Jessa wrote on her Instagram story with the crying laughing face emoji. Because there's no better way to tell people that you're losing weight from the last pregnancy while shutting down uninvited criticism in the process.

Over "Training Her Kids"

Almost two months ago, Jessa was accused of "training" her kids after some Instagram commenters pointed out that she used the word "trains" when she talked about raising her kids, according to The Hollywood Gossip. It is unclear if Jessa and Seewald actually use some "training" methods, like "blanket training," which suggests punishing kids for not following directions which was made popular by the book, To Train Up a Child — Child Training For The 21st Century by Michael and Debi Pearl, according to In Touch Weekly. But whatever the case may be, Jessa wasn't happy when one of her Instagram followers decided to accuse her of "training her children."

Jessa jumped in to her photo's comments to reply to the person who accused her of training her kids. Jessa wrote, according to The Hollywood Gossip:

We train for occupations, we train for jobs, we hire personal trainers for fitness. And we teach/train our kiddos for right behavior in the hopes they will grow up to be caring, thoughtful, and responsible adults.

Over Having A Messy House

No house can be perfect all the time, which is why it's so refreshing to see other moms share photos of their own messy house — it's real life and it's really honest. But some people had a serious problem after Jessa shared a photo of her messy house to Instagram. To some, the mess of laundry on the floor, along with dirty diapers sitting around, was too much for her followers to handle. "How do you let your house get this dirty?" one commenter wrote, according to CafeMom.

But Jessa had a few things to say to those commenters, responding to them so perfectly in an Instagram post the very next day. While Jessa's response was a little long, there was one very important take away from it — messes can be cleaned up and making messes is something that happens in real life. Jessa responded to the critics by writing:

As I was making out my housecleaning to do list the other day, this thought struck me...we all try to put our best foot forward and are most comfortable posting our "highlight reel" for people on social media to see. I could've waited 24 hours and posted pics of everything freshly cleaned and looking beautiful (the stovetop is sparkling, the dust bunnies have been removed, laundry is folded, bed sheets are washed, etc). Certainly people would find no fault in that...but many may find fault with themselves. I didn't do that for a reason. Reality.

Over Her Son Being Attached To His Sippy Cup

Last September, Jessa's brother-in-law, Jeremy Vuolo (who is married to Jessa's sister, Jinger Duggar) posted a photo of Spurgeon all dressed up in his Sunday finest, with a sippy cup hanging out of his mouth, according to OK! Magazine. Jessa had predicted that people might shame her for this, so she clapped back at them before they even had the chance to criticize her. Her caption on the Instagram post is golden, especially with the use of #seethroughsaturday, convincing other moms to let people look behind the pretty facade of Instagram. Jessa wrote:

That's my boy! Yes, he's 22 months old. Yes, he drinks water from a sippy cup, and yes, he prefers to drink much of his milk/kefir from his bottle — especially before nap/bedtime (TBH, I wish he wouldn't have weaned himself early, and would've breastfed until two. There, I said it). ... So there ya have it. If you are experiencing anxiety over this, please share all of your wisdom and perfect parenting advice in the comment section below.

Jessa isn't afraid to share her flaws as a parent, and she is just as fearless when it comes to telling commenters that having flaws is OK. Everyone approaches parenting differently and just because she's a celebrity, it's still not OK to criticize Jessa's style, and she'll happily clap back when necessary.